Today’s post is an investigation into the use of shadows in cinema by Francis Martin “Marty” Mutuc. The article covers the basic concepts of shadows and how they can be depicted by a camera, including examining the first intentional use of shadows to achieve a narrative effect (German Expressionist films of the 1920s).

We’ll also cover how the reader could use shadows themselves in creative / innovative ways to achieve their specific directorial intent. Whether you’re making narrative films, or working on video production projects, the principles are the same and can be used in both.

What could be more obvious?

Since the dawn of filmmaking, shadows have played a quintessential part in its composition. It is intrinsic to the nature of photography to capture shadows, after all.

There is more to shadow than meets the eye. It is the intent of this article to mine its depths, and pay homage to the weighty substance of its ethereal beauty. 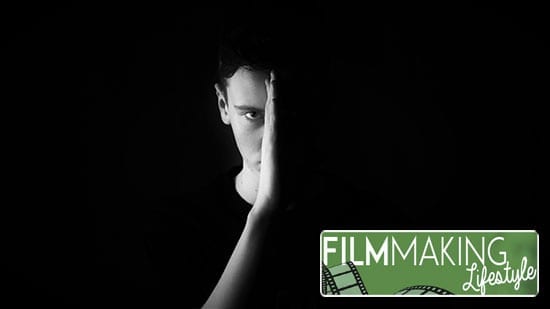 The Ethereal Beauty of Shadow

From the time light enters the shutters of a camera lens to the time it is chemically captured on film for analogs, or electronically written on digitals, the possibilities are limitless.

How light interacts with opaque objects to cast shadows is organic to filmmaking. The closer a casted object is to a light source, the sharper the shadow; the farther it is, the more blurry.

The closer a casted object is to a light source, the shorter the shadow; the farther it is, the longer.

Filmmakers may not be scientists, but they may well be master manipulators of this basic law of physics.

Shadows in the Early Years of Cinema

At the start of the 20th century, in the nascent years of the film industry when silent films were the rage, directorial creativity was honed by the limitations of technology.

The prolific use of light and shadows are most notable in the German Expressionist films of the 1920s. Here, myriad variations of shadowing techniques were used, some even for the same shots, to either develop character, narrative, or overall scenic mood.

Director Robert Wiene was celebrated for his stylistic simulation of them. In his 1920 masterpiece, The Cabinet of Dr. Caligari, Mr. Wiene painted shadows onto a film set instead of coaxing them naturally.

The result was eerie: unnatural shadows pervaded many scenes, sprawled out across the set seemingly encapsulating the film’s characters.

For example, the use of artificial shadows in the Holstenwall Town set created the look of jagged buildings on the verge of destruction, making the audience feel like the town was about to crumble at any given moment.

Thus, in artistic terms, film critics lauded this as an apt representation of the unstable psyche of the film’s characters. 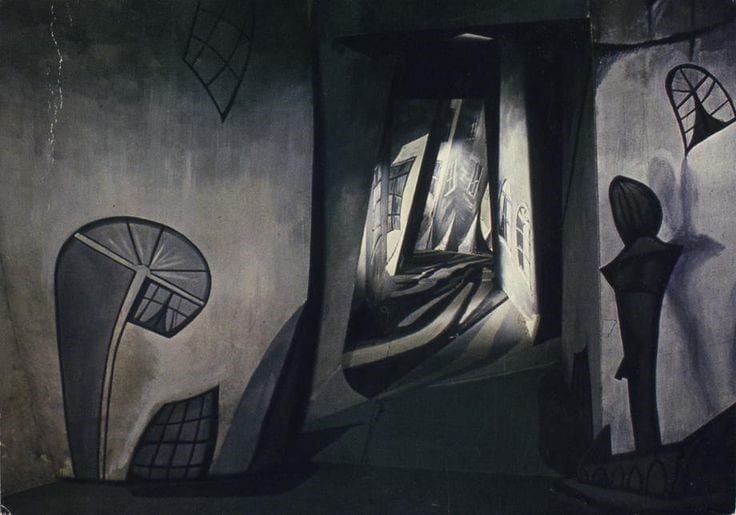 The Cabinet of Dr. Caligari (1920) – source: Pamela Hutchinson, The Guardian

Another excellent depiction of the play of shadows is F.W. Murnau’s Nosferatu in 1922. In one of the film’s scenes, a silhouette creepily ascending a flight of stairs, depicted the otherworldly essence of the main character, Count Orlok.

As far as creating cinematic tone, this bites the jugular in furthering the certainty of impending doom. In fact, this scene created a narrative scenic convention that continues to be copied in vampire films today — two  of them being Bram Stoker’s Dracula (1992) and Shadow of the Vampire (2000).

The noir films of the 1930s took German Expressionism a bit further, using shadows to portray a pessimistic view of the world. Robert Siodmak’s The Killers (1946) breathed life to classic black-and-white films by heavily contrasting extremes — the intensity of black with the starkness of white. This neo-expressionist style flavored this crime movie’s core with mystery.

The treatment of shadows don’t receive much attention in contemporary films probably because the advent of Techicolor paved the way for other coloring techniques. However, there are still some notable instances when this has been used elicit dramatic effect.

In the 2007 western, No Country for Old Men, as the character, Sheriff Bell, opens his motel door to engage in what would be the climactic final shootout, the gray outline of a cowboy slowly takes shape on the wall behind him. The audiences sees what Bell needed to see in and come to terms with himself – a lawman who enforces the law without reluctance.

In Martin Scorsese’s iconic Raging Bull (1980), the use of grayscale to highlight shadows in a prison scene exaggerates the mental imprisonment of the main character, Jake LaMotta, just as clearly as his physical captivity.  A video essay here illustrates the contemporary interactions of light and shadow in greater detail.

Crafting Your Own Shadows

We can learn a thing or two from the legendary films of a bygone era and apply their genius to the relevance of today’s filmmaking. Who would not want to craft their own unique shadow-style?

For a start, intentionally color-grading footage to have less vibrance, saturation, and enhanced contrast, allows the sharp and dark edges of black-and-white films to edge a colored image without sacrificing intensity.

Why is this a basic essential? Shadows appear more distinct under low saturation because black stands out from the image (which would most likely have been tinted white under this colour technique).

A prime example of this technique is in the film The Lives of Others, by Florian von Donnersmarck. In the image below, the lack of contrast makes contours and outlines more pronounced, adding a melancholy feel to the mise-en-scene. 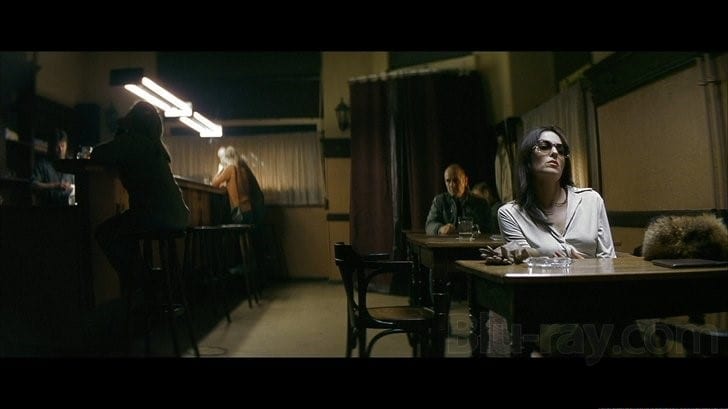 2. Bring Out Profiles of Characters

We can grab another technique from this shot. Shooting with very bright lights – key lights preferably – directed on a specific subject, will bring out the profiles you want emphasized. As long as there isn’t a significant difference between the exposure of the set and the shadow, the latter won’t be as pronounced.

We can best appreciate the shadows on the woman’s neck, and the tilted angle of her head, because the use of this technique also contrasts the starkness of her white shirt. As with the first technique, the more contrast, the more dramatic the shadows.

We can also get creative with the actual shapes of the shadows, by using objects that are easy to manipluate.

It is possible to rent/create cucoloris, also called “cookies” in the film set. Pieces of wood with cut-out designs can dramatically improve a scene.

When light shines through the cut-outs, the escaping light is dramatized. Besides creating creatively shaped shadows like those of Dr. Caligari which can be used to portray character within the film set itself, it is also practical for creating illusions of location.

The cookie and light create an illusion that the character is sitting next to a window, when in reality there aren’t any windows in the space. The same applies to the application of light sources to vertical or horizontal blinds in scenes where an actual window exists.

Shadows in Cinema – Don’t Be Afraid of the Dark

To conclude, shadows in today’s cinematic experience are usually under-appreciated. Only a few directors pay attention and use them creatively, losing out to the creative meat of a scene.

Perhaps this is why many shots of contemporary films look dull and lack the striking contrast of the German Expressionist and noir films.

Through this guide, understanding how shadows are created, and learning about some ways to recreate this artistic, creative feel, it is my hope that you, the reader, can become an even better filmmaker, subverting the current standard for mise-en-scene of shots.

I hope you’ve found this article on shadows in cinema helpful, whether you’re making narrative films or working on video production projects. The principles are the same.

Do you use shadows in the films you make? Let us know in the comments below.

What Is Forced Perspective?Definition, Examples & How To Use Properly