This is the 6th installment of this feature here on Filmmaking Lifestyle, where we chart the best-of-the-best from around the filmmaking and video production world. This article covers the best posts from March 2016.

Every month, I post a round-up article featuring the best things I’ve found around the web on filmmaking and video production.

I’ve fielded a number of questions this month from readers who are curious as to what the Courses involve. We’re still going to be posting awesome content on this site in the form of blog posts, as well as our various social media activities. The courses will be paid courses in the form of video and audio products.

We intend the courses to add even more value to fans of Filmmaking Lifestyle, as well as people who don’t yet know about the site. Like I say, we’re still going to be posting the free content on the site, so don’t worry about that. The Courses will be paid, but will be in addition to the free content, not a replacement for it.

Hope that clears everything up.

With the admin bits out of the way, let’s love right into the best of this month’s filmmaking and video production content from around the web!

Dennis Nishi, a multimedia reporter who’s work has been featured in the Wall Street Journal, NPR, the BBC World Service, let us know what’s in his bag. This is a really solid gear article.

Here’s Danny Boyle on his 15 Golden Rules of Filmmaking.

Here’s a cool gif that shows the difference in image of 3 bottles using various apertures.

We had a tonne of great articles on Filmmaking Lifestyle this month. With 7 articles published, this has been our busiest month yet! Near the start of the month, we kicked off with an article about the 14 Elements of Pre-Production for Filmmaking & Video Production.

Following that, we had a how-to article about setting up your filmmaker/video production company website.

Towards the end of the month, we featured an article on travel videography by adventurer and videographer, Thomas Alex Norman.

In big social media news, Instagram now allows videos up to a full minute long. This raises the previous limit from 30 seconds, which before that was just 15 seconds. It’s a huge move, as it shows the power that video has in top social media platforms like Instagram and now allows businesses and filmmakers to do more with the constraints of Instagram.

Here’s an article about the visual quality difference between 10-bit and 8-bit precision. The article discusses the benefits of using 10-bit processing in post-production.

Finally, KINETEK released a cool video this month that shows How Cinematographers Read Vector Scopes. Watch the video below to absorb some cinematography knowledge!

This month’s Picture of the Month is David Fincher’s Advice to Young Filmmakers. This is an image that’;s been floating around lately and is being shared in a lot of place. Here’s the image: 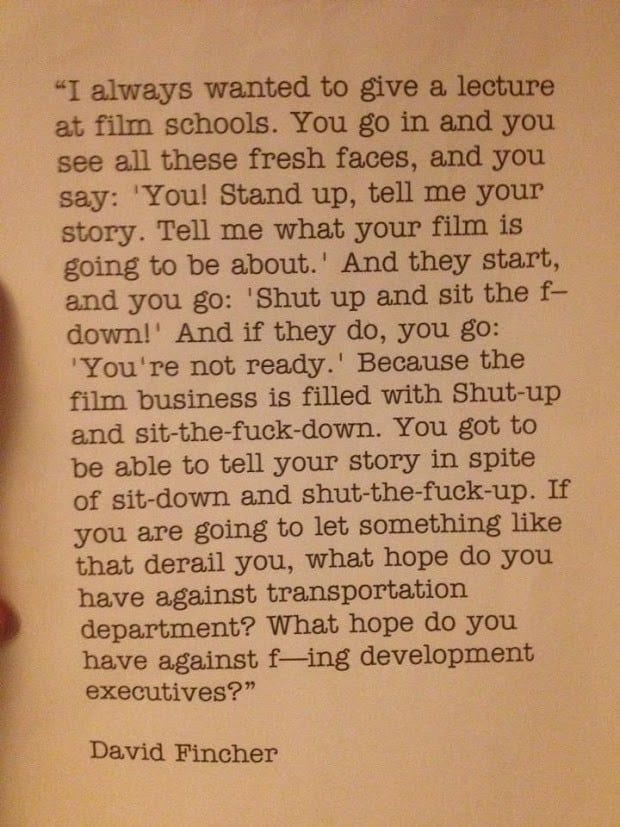 This month’s Video of the Month features some solid advice from Valley Films about starting a video production company.

Find anything else that was great out there in cyberspace? Drop some links in the comments below!

Until next month’s article, stay shooting!

Vimeo vs Youtube: Which Video Sharing Site Should You Use?

What Is A Visual Metaphor: The Definitive Guide

What Is CinemaScope? Definition, History & Theory [With Examples]

What Does An Assistant Director Do? Roles, Responsibilities & How To Become An AD