Setting a Filmmaking Budget in 2022: The Ultimate Guide

Do you struggle with knowing what to charge for your work?

Is the concept of a budget something that makes you cringe?

Today, following on from last time around, we’ll talk about how to set a filmmaking budget.

You Are Their Trustworthy Advisor, Not A Sleazy Used Car Salesman

Landing the client should not be about imitation, or trying to get as much money out of the project as possible. Your goal should be to do the best you can to imagine their vision with what they can afford.

If you keep this in mind, it will always result in a win-win scenario.

Of course, you can be the kind of person that charges up the ass for renting out your own lenses, but it’s my belief in not taking advantage of the client.

Creating a budget for a client will either be one of the hardest or easiest things to do.

It will be hard usually for things you’ve never encountered, and because you may be scared that you will be charging too much and it will scare the client away.

After about 2 years, it will be the easiest thing because your brain would have created shortcuts by then, and you will be able to spit out budget estimates on the fly.

Here are the steps to creating a filmmaking budget estimate:

1. Ask them what they’re looking for, and what outcome they expect.

2. Are they looking for Super Bowl ideas with a Super Bowl reach? Then that’s going to dictate the price.

3. Are you looking for us [the filmmakers] to come up with ideas or will you [the client] develop the idea?

4. How long do you want the commercial/video to be?

6. Where are you going to present it? Web or somewhere else?

7. Who is your audience? (They will usually tell you before hand, but if they don’t, make sure to ask.)

8. Will you take care of getting actors, or will I?

9. Will you need to audition actors?

10. Will there be a space rented for a shoot?

Ask them what they’re willing to spend. Say “What’s your budget?” The ones that don’t want to tell you right away are usually low budget.

For more professional clients they will tell you “Between 3 to 5,000.” This does not mean you quote them just one budget off the bat at $5,000.

If you know they are rich, and they want you to throw the first number, then you make sure you put it at full cost.

However, before you do, you need to send two more budgets. 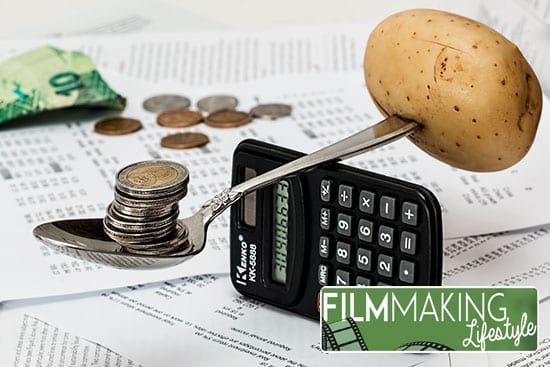 Starting out, I highly recommend giving the client 3 budgets  — gold, silver, and copper.

First one, the gold budget, is your dream budget, your ideal budget with all of the bells and whistles and all of the personnel you need to make it great.

Second one, silver budget, is still your best budget, but without all of the bells and whistles.

Maybe you can do without one or two personnel. Maybe you can wake up earlier to get those extra things you need, or maybe you can rent some equipment from friends instead of from a rental house.

You can still deliver a great product, but this budget should be about 20 to 30% cheaper than the first budget.

The third budget, the copper budget, should be about two thirds cheaper than the first budget. This is the crappiest budget, and your breakdown should reflect that.

You should make this a stinking turd, and try to dissuade the client from getting this budget. This is the bare minimum — you may barely make any money.

The reason for this is you will have a negotiation platform.

What do I mean by this?

For example, let’s say the client says “Oh, the first budget is just too much money. Any way for us to reduce this?”

So as you can see, if the client wants the video to be cheaper, they will have to give something up. You can’t just say, “Okay, we’ll take off $100 dollars because you asked nicely!” You have to make the client earn that money by sacrificing something from the budget.

Obviously, the kind of clients you deal with depends on where you’re at in your business. If you’re just starting out, the numbers will be smaller than this. If you’re a big burgeoning video company, then your numbers may be much greater than this. This is just a mid-range example to give you an idea, without looking too unobtainable.

Here are sample budgets of what I’m talking about:

Up to 5 minute video.

Up to 2 minute video.

The reason that 3 budgets is so effective is that most clients will pick the middle budget, or as I like to call it: the goldilocks budget.

You just have to make sure to make sure the copper budget is very undesirable, and once in a blue moon the client may pick the gold budget, making you very happy.

Eventually, as you get more clients, you will graduate to just sending two budgets as the copper budget will no longer be a viable option.

For example, we only sent Disney two budgets, gold and silver, for most of the project we did for them.

If you want to see an example of what a detailed budget breakdown looks like, during the research for this article, I found this awesome example from MWP Digital Media: 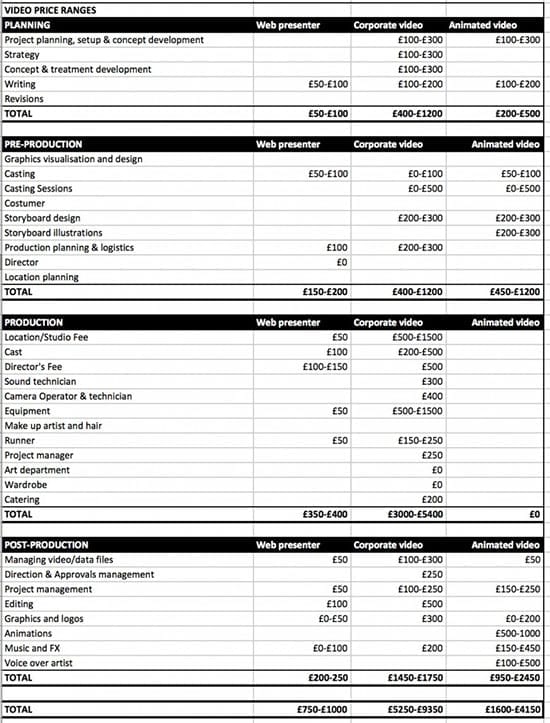 Once the client has agreed on a budget (hopefully not the copper budget), then you set a date and time for the shoot.

Before the shoot, make a Production Agreement of what is expected of you.

a) Include this in your Agreement:

b) Filmmaker agrees to provide the following: [list out your equipment and personnel]

c) Filmmaker agrees to the following video concept for the client [explain the concept in detail, but not too much. Just enough so it’s not vague.]

d) Filmmaker agrees to the following payment terms (these can be flexible):

e) Filmmaker agrees to adhere to these dates and deadlines

After everything has been spelled out, there should be no confusion between you and the client.

If the client suddenly wants something added on the day of, or after it’s already been shot, then you just say “look, that’s out of the project scope, it’s not listed in our agreement, but for a budget increase, I’d be happy to assist you.”

If you don’t have an agreement that can be upheld in court, then you’ll have tendency to be screwed.

Make sure to get a signed copy by you and the client. Scan the document and email it to the client.

That’s it, you’ve done it. As long as both parties agreed to all of the terms, then there should be no misunderstanding.

Now that you understand how to set a filmmaking budget, you’re ready to begin production. We’ll talk about that next time in this series of articles.

I’m Giordany. I’m writing a book on how to start your own video business. Every week, I’ll be releasing exclusive new chapters here on Matt’s site, Filmmaking Lifestyle.

Join me in the discussion – hate it or love it, I’d like to know. Feel free to chat in the comments below.

What Is A Production Coordinator? Roles, Responsibilities & Job Description

How to Make a Green Screen: The Definitive Guide

What Is Sound Design For Film? Definition & Examples Of This Important Film Production Process