Do you want to know more about what a Production Assistant does?

Well, if so, this blog post is for you! In this article, we will be discussing the tasks that are usually associated with being a production assistant. Along with these duties and responsibilities, we will also go over some of the qualities that make someone successful in this role.

We hope that reading this provides insight into what the job entails as well as how it can lead to bigger opportunities in film or other related industries.

What Is a Production Assistant?

A production assistant is a person who has the responsibility of supporting the film crew with their needs.

They are often on set before shooting starts and they stay until after all of the shots have been completed.

Most importantly, this includes transporting equipment to and from sets, sorting out props, handling paperwork or filing footage as well as being present during filming to assist in any way possible.

In order to be successful in the production industry, a Production Assistant must have strong organizational and time management skills.

It is their responsibility to ensure that all of the necessary materials are on hand for every shoot.

They also need to be able to communicate effectively with other members of the film crew.

A production assistant’s job is to support the director and other members of the production team.

They are responsible for taking care of the minor day-to-day responsibilities that allow directors to focus on more important tasks.

A PA will help with a variety of tasks, from picking up lunch to running errands, and even dressing actors in the wardrobe. 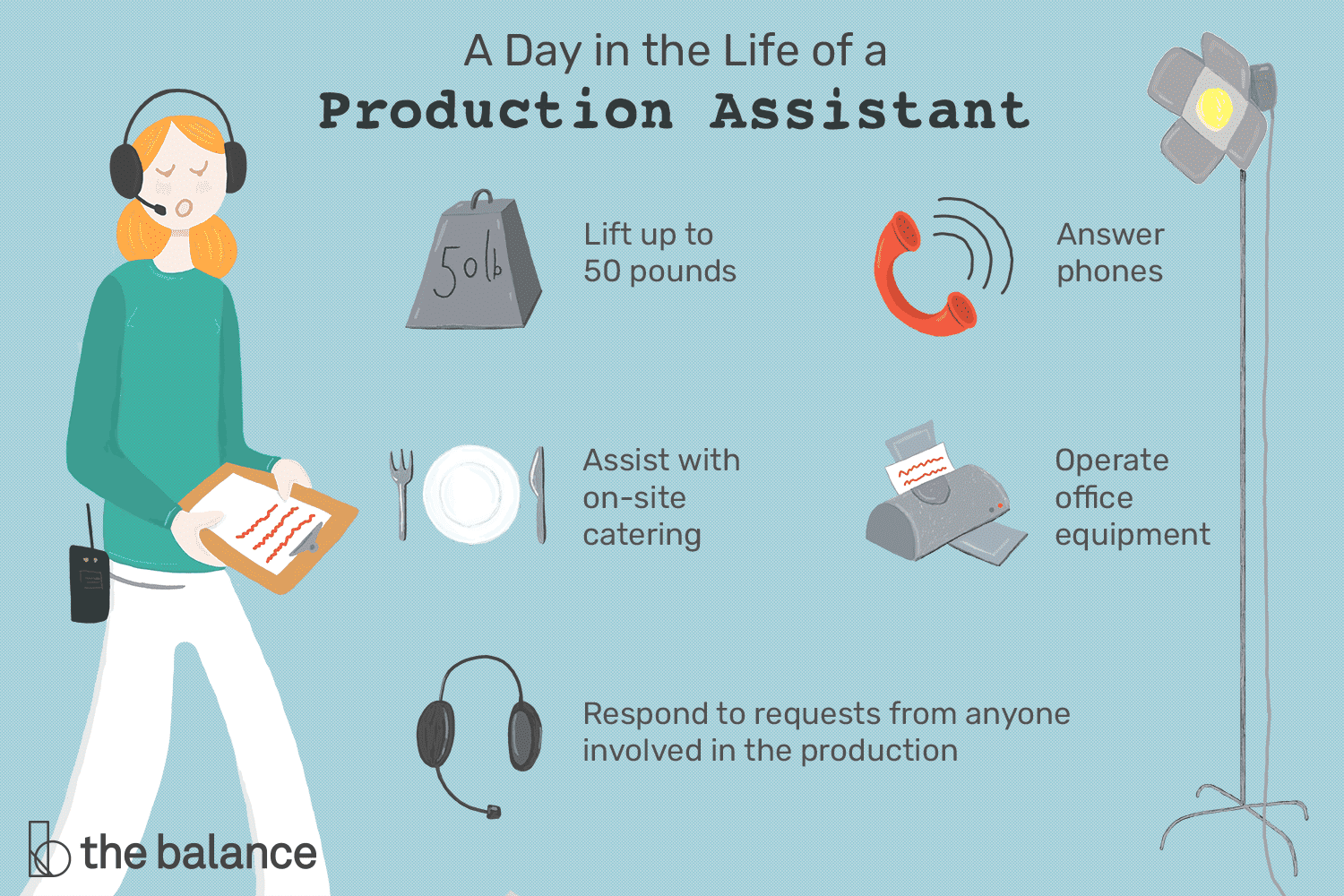 They provide a variety of services to keep everyone on schedule and running smoothly.

In return, they’re well compensated for their work with an average salary range between $24,000-$36,000 per year depending on experience and location.

If you want your salary as an entry-level PA to be $70,000 it would not happen overnight – you need experience in order for this amount to be possible.

The highest-paid movie producers earned over $2 million in 2016 according to Forbes Magazine and it’s not uncommon for some employees in this industry to work 60+ years.

If you’re interested in breaking into the entertainment business as a production assistant then you have to have experience handling professional equipment, multitasking abilities, strong organizational skills, reliability under pressure, etc.

The process of film production can be a lot, between coordinating schedules and keeping track of every detail, from props to catering needs, it takes more than one person to do everything!

The duties include fetching coffee, carrying equipment, assisting with lights and sound, coordinating transportation for the cast/crew, etc.

Film production assistants must have strong organizational skills in order to keep things running smoothly on set and be able to work well under pressure.

They can also specialize in certain areas such as makeup or props.

Film Production Assistants are required to wear many different hats throughout the day so they need to be versatile individuals that can adapt quickly to stressful situations.

A high school diploma or GED equivalent is required to work as a film production assistant, and typically four years of experience in the field is needed before someone can be promoted to a crew member.

The Bureau of Labor Statistics also estimates that 80% of all employees have some college education, with most having at least an Associate’s degree.

We would also recommend you to take courses in editing software like Final Cut Pro X: if not already familiar with these programs, classes are generally offered in the big companies.

There are many different departments in film and television productions, but I’m going to focus on PAs for now.

All have their own responsibilities that they need to be aware of before starting on a show or movie set.

Production Assistants are the backbone of any show.

They’re often the first point of contact for production members, such as actors and crew members, and they make sure that everything is running smoothly on set.

Production assistants are often responsible for carrying out tasks as assigned by their supervisors, which may include anything from arranging travel and accommodation to organizing catering services or managing schedules. They work in all areas of the production process, including pre-, post-, and on-set.

Production assistants are also called PAs or “production peeps” and can be found working in various departments, such as wardrobe, props, transportation/travel coordinator (T&T), craft services, or location manager (LMS).

– Greeting guests as they arrive at the studio

– Making travel arrangements for cast members and crew when filming on location in another city/country.

As a Production Assistant, you may be tasked with the following responsibilities:

-Assisting Directors in pre-production, production, and post-production phases of filming; fetching coffee, snacks, and other items for the crew on set.

-Taking notes while meeting with clients to provide information about their project.

-Organizing or assisting in the organization of props, costumes, and equipment as needed by production staff.

You have many duties as a Production Assistant!

You are able to work closely with directors during all three phases of film production (pre-production, production, and post-production).

How To Become A Production Assistant

Here are some great tips on how to get started and what qualities will be beneficial in achieving your goal of becoming a PA.

1. Join an Internship Program – This will give you valuable experience, as well as help, make connections within the industry.

2. Get Your Foot In The Door – If possible, try getting an entry-level position with staffing agencies like Crew One or On-Set Productions which may lead to future opportunities with film productions themselves.

3. Develop Good Rapport With Key People – Make sure that when meeting people for the first time, they leave thinking highly of you.

typical employers for a production assistant would be television producers or film studios.

A production assistant needs to have an eye for detail, strong organizational skills, and good communication skills.

The Bureau of Labor Statistics estimates that there will be 8,000 new jobs created by 2020 as digital media continues to grow more prominent in our society.

Here’s a list of some typical employers for production assistants:

The rates for production assistants vary greatly on the type of video being produced and where it is being filmed.

Many people don’t realize that the rate can also depend on whether or not a production assistant has an agent.

The best way to find out what your salary will be as a production assistant is to contact an agent, who can help by giving you information about rates in your area.

Music video production assistants are the backbone of any music video shoot.

They help execute the director’s vision, but they are not always compensated for their work.

The average PPA salary is $12/hr which may sound like a lot, but it’s not!

Peter Cohan said his helpers were paid $12 an hour and he estimates that about 20% of those employees are students or interns who are looking for work experience rather than money.

the size of the project they’re working on (a one-day shoot vs a 3-day shooting schedule).

Did you know that this is illegal according to the Fair Labor Standards Act (FLSA)?” “In order to determine what your rate should be, you must first understand how many hours of labor you are working.

Then divide that number by 40 hours and multiply it by the federal minimum wage.

If your answer is less than $7.25/hr, then there is most likely an issue with your payment.

If the employer refuses to raise your wages or hire someone else at higher rates, then contact the Department of Labor for assistance.

This discrepancy has led some PAs who work in both film and TV productions to unionize with the IATSE (International Alliance of Theatrical Stage Employees) so they can demand higher wages from both mediums.

The average salary for a production assistant is $15.00/hour, but there are some stipulations that can increase or decrease the hourly rate depending on the state you live in and what experience level you have.

If you’re just starting out as an entry-level PA, then it’s likely your hourly rate will be around $10/hr-$12/hr.

If you’re more experienced with higher levels of responsibility, then your hourly wage could be up to $30+ per hour if not more!

The rates vary from company to company so it is important to do research before accepting any job offer and know exactly what benefits are offered by each employer.

The rates for commercial productions also vary and depend on the number of people working at one time as well as what services they need assistance with.

It is important that production assistants are aware of their rights when it comes to paying and benefits so they know how much money they should be making!

What Is a Line Producer? Is This The Right Production Role For You?

Film Credits Order: Where Does Everyone Fit (With Examples)

What is Persistence of Vision? Definition & Examples Of This Technique

How To Make The Leap From Directing Videos to Directing Features