LOVE The Process! How To Change Everything!

You know, every day I think about filmmaking, and I have some wacky distinction that changes the way I perceive things.

The crazy thing about filmmaking is that it’s one of the only art forms in which you have to really get out of your comfort zone to practice.

Okay, the last one was a slightly bad example.

A Shift In Thinking

The point is that filmmaking requires a massive shift in the way you think in order to learn it – you’ve got to force yourself out of your comfort zone. You’ve got to really make that effort in order to practice even just the basics.

Tennis requires just getting onto a court. The basics would be hitting some balls lightly. The basics of physics will require some books. Driving a car, simply getting in one and having someone teach you the basics of the pedals and what they do.

But to practice the basics of filmmaking? You’ve got to actually find at least some money in order to shoot. To interact with a film camera using even the basics can seem like a lengthy step compared to pulling out that book and studying, or hitting that court for tennis lessons.

So this isn’t to belittle other endeavors and the trials and tribulations that people go through to achieve success with these various pursuits.

You only need to watch any collection of days from the two weeks of Wimbledon any year to see just how mentally strong a tennis player has to be!

I just wanted to illuminate the struggle of learning filmmaking from the ground-up. Finding the funds to get any sort of project off the ground is something many of us struggle with.

If only it was something we could practice on our own in order to get really good, we’d have exceptional filmmakers everywhere! Whereas the physicist, the tennis player and the wannabe driver can practice on their own, the filmmaker-to-be needs real-life expensive cameras on which to practice!

How To Get Out There And Really Improve

So I’ve been trying to get out and shoot something four times a week. Anything. Maybe there’s not a desperate need for an expensive camera.

The field is king in this game. Once a week isn’t enough.

Too many people just do the weekend thing. I know they’re on job commitments and family commitments and all the other commitments, but there’s a way to find time for all this. You make time rather than find the time. It’s there if you want it.

Can’t find time to shoot in the day due to work commitments? How about the night? The night will suffice. Just stick up your china ball lights (very cheap, after all) and you’re good to go!

This weekend thing, it loses your flow. Really. Even if you have a good weekend, by the time the next Saturday rolls around, you’ve lost all the momentum you worked so hard to achieve the week before!

It needs to be hardcore and sustained practice to create the snowball of the progress we all desire to get really good at this stuff.

Here are some ideas:

That’s the main thing here – you need to get in touch with your creativity and then analyze it creatively afterward. That’s powerful.

That’s a journal or note-taking session after every day of handling a camera. Every experience should be charted and examined. Even if you’re not posting all your experiences on the net, having a journal is really useful.

Not only can you go back and look at it months on to see just how far you’ve come, but you can chronicle your current ideas and experiments so that you know where you’re at! 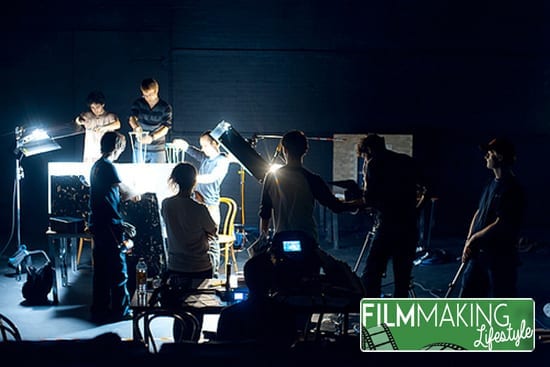 Above All, It’s A Process

It’s the process. I think you’ve got to love the process. When you have a bad day (and I’m not just talking about filmmaking here) and you go home feeling down and wanting more for yourself, you have to LOVE the process in order to be free. To pick yourself back up. To continue.

You have to do it for the process, become enamored with just doing it mechanically like a constant series of shifting states.

No state is permanent. You’ll see many many changing states in your journey.

But you have to rely on the process. Trust in the process. Know that even if you have a bad day that, a rejection, a lapse of focus; it’s all part of your plan, your long-term plan to get really good. That you have tomorrow and the next day, not to mention the next week and month, to make up for that bad day!

The field may be king, but the process…the process is princely!

It All Comes Down To State

What the heck is a state!? I talk about it a lot on this site.

As far as I can see, state (as I use it in this form) was brought to the forefront of the self-development community by Richard Bandler and John Grinder (the co-creators of NLP) in the 1970s.

I use state in my writings to reflect the state of mind that one’s in – be it positive or negative.

Sportsmen know all about state. That golfer who hits a terrible shot off the tee and then has to take the long walk to where his ball now lies…he knows all about state. He can walk through the baying throng of fans and keep his composure ready to take on the next shot. He clears it out of his mind. That’s state. That’s powerful!

I see my state as twisting and ever-changing these days. I’ll have the odd day when I feel down about something, but I see it as part of the masterplan of sorts. It can’t get to me. It will soon fade into the positive state that is shortly following it.

Just like seeing through the matrix of the world all around us, I start to see patterns emerging all around. I’ve begun to see these same pattern repetitions in my states.

It’s important to realize that your next great state is only a thought away. And that’s no new age mumbo jumbo. We are what we think and we can change it at any time!

It’s late and these are my current thoughts on self-development and filmmaking. I realize this may be a little esoteric and some readers may wonder where I’m coming from with all this. But hopefully, people who are actually out in the field of endeavor can relate to this and pull something from it.

It’s good to have an outlet for attempting to describe thoughts and personal breakthroughs.

Without Commitment, You Ain't Got Nothing

How Reframing Can Help Your Filmmaking

Ways To Green And Make Environmentally Friendly Your Film Production

The Best of Filmmaking & Video Production May 2019

What Is A Post Credits Scene: The Essential Guide To The Movie Stinger [With Examples]