What Is a Teleprompter? Definition, Examples & How To Use It The Right Way

Today, we have an article on teleprompters and their use in video production. We’re going to cover what is a teleprompter, among other things.

What Is a Teleprompter?

Word has got around that our admiration for the largely flawlessly speaking television presenters should not administer to their phenomenal text memory.

Even if it does not look like that, they almost all read. Not from the leaf, that’s what we would see, but from a device that shows them invisible to us, the manuscripts. 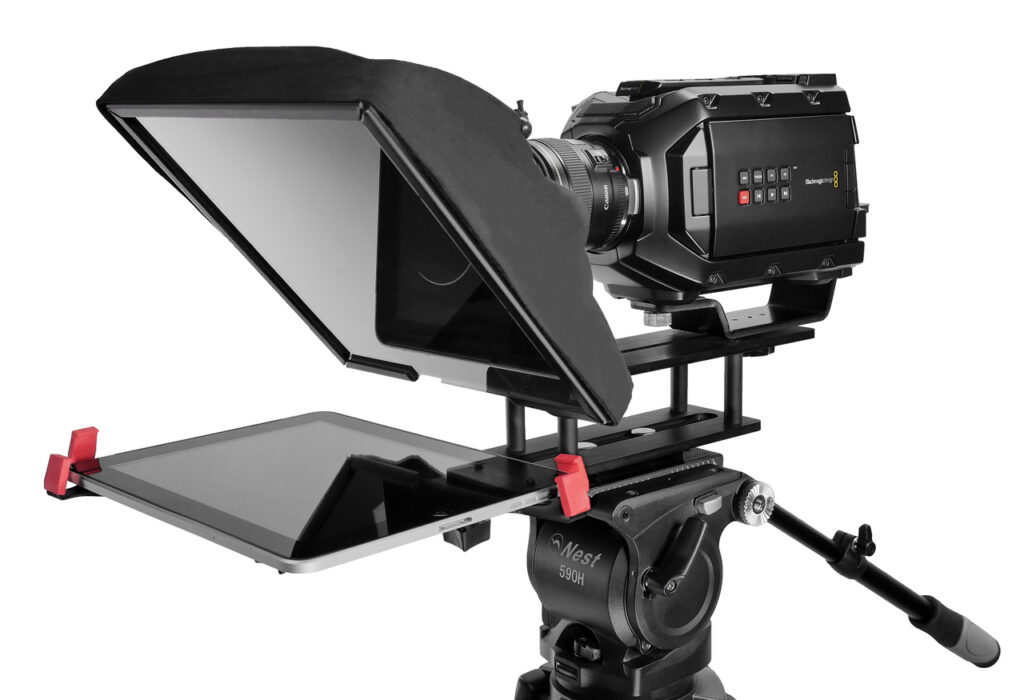 If someone is to speak a longer text directly into the camera, there is nothing better than a teleprompter. It was invented by Irving B. Kahn in 1972, the nephew of the famous composer Irving Berlin.

What Is The Purpose of a Teleprompter?

The purpose of the teleprompter is to allow the moderators, without constantly looking at a piece of paper or the pile of moderation cards, to read their texts.

The personal address of the viewer with a view directly in their eyes gives the impression of free speech even complicated moderation.

For this purpose, the text is displayed on a monitor / LCD / TFT display, which is mounted under the front of the camera.

But if you look very carefully, especially if the camera is close to the moderators, you can see how the pupil moves back and forth from left to right.

Teleprompters are controlled by normal computers. The software is available for Windows and Mac. Usually, someone has to control the computer to scroll evenly through the exact text that should be read.

Therefore, a connection to the operator must exist. There are also variants with a push button or footswitch, where the moderators themselves control the text, but this is more stressful for the speaker. 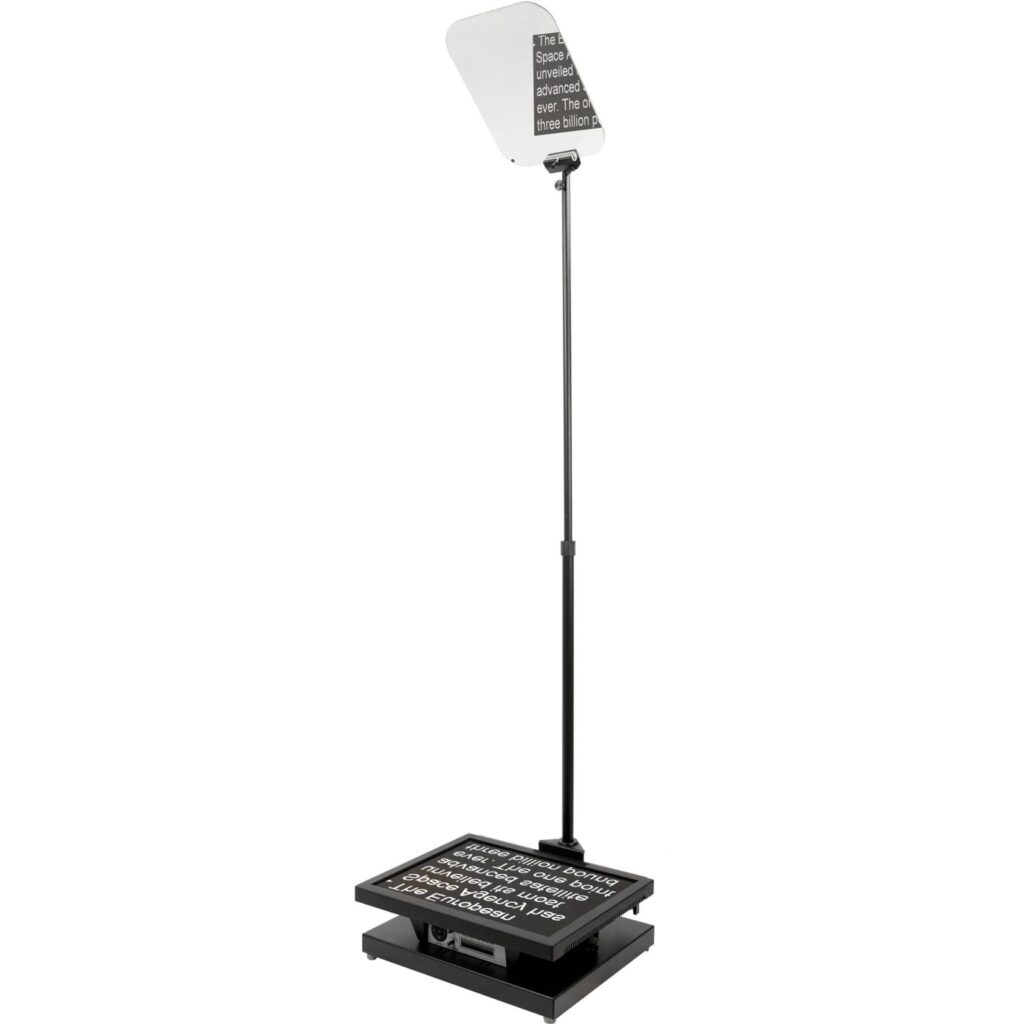 The latest-generation camera prompters work with 14 “TFT displays, which correspond to a 17” monitor.

They are brighter than a monitor picture and of course lighter. Balancing screens require balancing weights that hinder the cameraman and add extra weight to the tripod.

Teleprompters are usually attached to support rods, which protrude from a metal plate, which is screwed between the camera base and the swivel head. I

n the low-budget area, however, there are apps with which you can make a touchpad or even a smartphone that is clamped next to the camera, the teleprompter.

Modern teleprompter programs can use all popular fonts. You can choose the font size differently so that distances of up to 10 meters can be realized.

If presenters, confusion, confusion, whatever comes up in order, can easily jump back to the right text.

In the preview window (Preview) you can then look at the sequence in Simulation. Time information that also serves for automatic control can be assigned for each text block.

You can also let the individual text block speak from the moderator and stop the required time with a mouse click. This is then automatically adapted for the block.

A software scroll speed controller allows you to control the speed manually, which is important so that the text flow does not drive the moderators in front of them.

In principle, all current fonts can be adjusted in modern devices, with their good readability even at a distance, the most important argument.

By the way: The most important difference within the sender hierarchy between speakers and moderators lies in the permission to use a teleprompter.

The pure speakers ( newscasters ) must read from the sheet, while the moderators the direct eye contact with the audience is guaranteed by the teleprompter. Reading this anyway. And the lyrics often do not come from their own pen, but from editors.

You can deliver the texts as text files or in Word format. The surgeons want to get these files on a storage medium (floppy disk, CD, USB stick) preferably a few days before, in order to be able to set everything up correctly.

For some older teleprompters, the text still needs to be typed in by hand, but they are dying out more and more. With these old devices, the text must then be printed on special paper rolls, if you change something, even a few words, everything has to be reprinted. 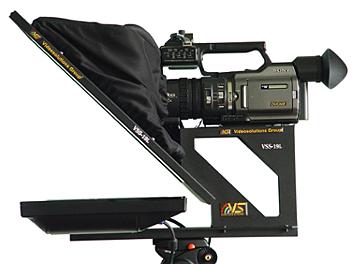 Important: The moderators should always get the texts as an expression on paper, for practicing and reading this is easier. Exercise is an important keyword.

Moderators and operators should always practice the texts and procedures before recording so that the speech and scrolling speed is optimally tuned.

Often the computers have several video distributors to give the text to different teleprompters so that the moderators in the studio can move freely and also respond to different cameras.

There are also free teleprompter operators who bring their own equipment.

Incidentally, as a low-budget variant, you can also achieve a similar effect with a laptop that you hold next to the camera, even if the view of the moderators is not exactly in the camera.

Or the good old tablets are kept next to the camera, of which the few who still speak freely on TV today at least refer to their keywords.

With the lighter LCD displays came small, lightweight teleprompters on the market, which can be attached directly next to the camera optics. For small distances to the speaker, these are completely sufficient.

There are even solutions in which the iPhone or a touchpad can be attached to a teleprompter next to the camera and its screen is doubled by a magnifying foil lens.

What Is a Talking Head? Definition, Examples & How To Use Them The Right Way

Vimeo Embed – Learn How to Embed Your Vimeo Videos [With Tutorials]

How Did They Make Ted: The Making of Ted