What Is An Establishing Shot? Definition & Examples Of Shots

An establishing shot is a wide, sweeping view of the setting for a film or television show.

The term comes from theater stage design and refers to the director’s use of a long shot to establish where and when an action takes place before switching to close-ups.

Establishing shots are also sometimes called wide shots because they include more of their surroundings than close-up shots (or medium shots).

An establishing shot is a type of camera angle, typically used at the beginning of a scene or sequence in film and television. It shows the setting where the story will take place, and helps establish its location.

WHAT IS AN ESTABLISHING SHOT

What Is An Establishing Shot?

An establishing shot is a wide-angle view of a location that establishes the setting and mood for the scene.

These shots are typically used at the start of a film or TV show to provide context, but they can also be used during scenes where something dramatic has just happened.

A good way to think about it would be as if you were looking at your house from across the street, then taking a picture.

You’re viewing your house from afar, but also noting its location on the street relative to other houses around it.

Establishing shots can be used in movies and TV shows for many reasons: They can show how far away someone or something has traveled; they can give insight into geographical or cultural surroundings; they provide hints about what’s happening off-screen (or just outside of our frame).

Establishing shots can be purely scenic, showing only nature or man-made structures; they may also show people at work or play, things being manufactured (such as cars), or events happening in real-time such as traffic jams.

An establishing shot usually lasts about five seconds before cutting into a closer shot.

An establishing shot allows the audience to get their bearings and understand where they are in relation to other things in the scene.

It can also be used for dramatic effect or just as a way of showing off your location, but it’s no less important.

What Purpose Do Establishing Shots Serve?

Establishing shots are a technique that filmmakers often use to familiarize audiences with the setting and provide context for the story.

They can serve as a prelude, giving viewers an idea of what is about to happen or they can be used as a postscript, summing up how things turned out.

In addition to providing contextual information, establishing shots also give audiences something stable and recognizable in an otherwise unfamiliar environment.

The best-establishing shots are ones that don’t have too much visual flair but give you an idea of where you’re at or how it looks around you.

Establishing shots can be used to set the scene in a film, or show an audience where they are located.

Some common establishing shots include aerial views of cities and landscapes.

Its The establishing shot’s main purpose – to provide an audience with the context for where they are – geographically and chronologically – so they understand what is happening in the film better. 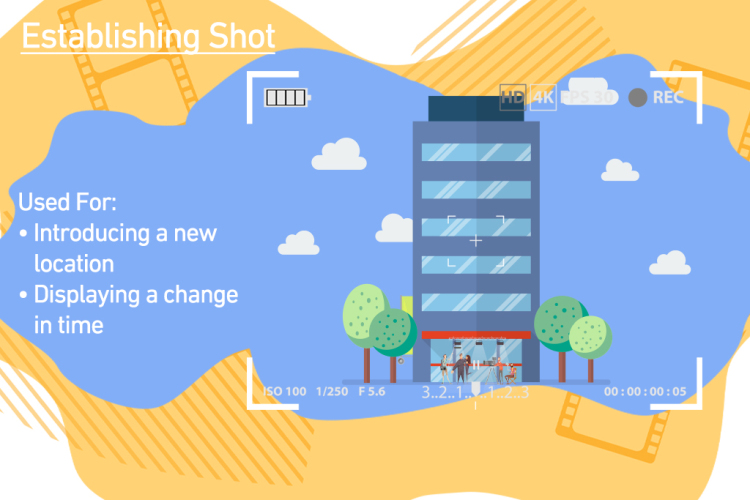 First Known Use Of Establishing Shot

The shot was introduced in “Birth of a Nation” (1915) by D.W. Griffith, whose M.O. was a panoramic long shot to establish place, followed by a mid-shot and then a close-up.

For years this technique remained nameless as techniques do in a new art form until they survive an extended period of monkey-see-monkey-do.

The term “establishing shot” didn’t become part of the vocabulary until the early 1930s, and then initially to label shots critical to Hollywood’s trend of setting movies in foreign locations.

Also, one of the first known use of an establishing shot was in the opening scene of Alfred Hitchcock’s Rear Window (1954).

The scene shows James Stewart’s character, L.B. Jeffries, from behind as he watches a man and woman walk down their apartment building hallway to their door.

He then turns back to look out his rear window at the courtyard below which is populated with children playing on swings, people walking dogs, and couples sitting on benches talking or reading newspapers.

Trademarks Of The Establishing Shot

Trademarks of the establishing shot are used to create a sense of space and time in a film. The viewer is able to better understand what part of the world we are in, as well as when it takes place.

For example, an establishing shot could be when you see a long highway with cars driving on it; this would tell us that the story takes place near or after 1990 because highways came into existence then and they were not around before that (at least not in America).

Trademarks of this type of shot include shots that have an aerial view, show movement in nature, or use long takes with little camera movement.

These types of shots give viewers information about where they are; however, there is not always agreement on what constitutes an establishing shot because it can vary from one director to another.

The best example in film history would be when Bonnie and Clyde have just robbed a bank in Kansas City, Missouri. As they’re driving away from the crime scene, director Arthur Penn zooms out to show the city skyline.

The establishing shot is a camera angle that takes place at the beginning of a film and shows the audience some sort of contextual clue.

This shot could be used to show where you are, who’s in the scene, what year it is, or any other piece of information needed for understanding.

Establishing shots can be useful because they allow viewers to understand key details about the setting without having to read them on screen.

There are 3 types of establishing shots: wide-angle, full-frame, and medium close-up.

A full-frame shot is a type of camera shot in which a character’s entire body reaches from the top of the frame to the bottom of the frame.

These shots allow the audience to see the emotions on a character’s face while simultaneously seeing their physicality, body language, and actions.

Medium Close-Up Falls between a Medium Shot and a Close-Up, generally framing the subject from chest or shoulder up.

Close-Up Fills the screen with part of the subject, such as a person’s head/face. Framed this tightly, the emotions and reactions of a character dominate the scene.

We know we’re watching “The Walking Dead” when Rick Grimes takes his first steps into Atlanta’s overgrown streets on horseback or when he stands before a herd of walkers taking him in like cattle at auction.

In these scenes, we see iconic places such as downtown Atlanta’s skyscrapers and highways.

For example, in the “Harry Potter” film franchise, many of the establishing scenes showcase Hogwarts, the school that serves as the setting for many of the following scenes.

The passage of time is also established with shots that show snow-covered turrets on the school, indicating the change of seasons.

Creative Ways To Use The Establishing Shot

While there are many creative ways to use this type of shot, one way that may not have been thought about before is using an establishing shot with text on it.

It does this by providing a panoramic view of their surroundings, which can be used later when something interesting occurs and we need the viewer to have an idea of where they are and why it matters.

The Establishing Shot is an important tool in filmmaking. It’s typically a wide shot of the location where the action will take place, and it’s meant to give audiences a sense of familiarity with their surroundings before they dive into the scene.

Do you remember the first time you watched a movie and saw an establishing shot of the city? It was probably one of your favorite parts about watching that film.

The establishing shots are some of the most iconic scenes in all history- they set up what kind of world we’re going to be walking into, but also give us hints into who this character is.

How Do You Draw An Establishing Shot?

When you want to set the mood for a film, an establishing shot is key. Establishing shots are those that establish where in the world your story takes place and what time period it’s taking place in.

In many films, this is done by showing a sweeping aerial view of the landscape or some other landmark that signifies where we are.

In others, it can be as simple as panning across a street with cars driving past on one side and people walking on the other – something so commonplace that you instantly know you’re watching something set in modern-day America.

Regardless of whether they’re grandiose or subtle, these types of shots help immerse viewers into whatever adventure awaits them at home base before they head out into.

Have you ever seen a movie and noticed that the camera is always moving? The establishing shot is a type of film technique used to create this visual effect.

An establishing shot can be thought of as the first scene in a movie, giving viewers an idea of where the rest of the story will take place.

What Is a Best Boy in Film? Roles & Responsibilities For This Film Crew Position

The Two Shot: Complete Guide & How To Use This Shot Framing Type

What Is Shallow Depth of Field? Definition & Examples In Photography & Film

Best Cinematographers Of All Time: The Essential Guide