Today, Claudia Moreira is here with an article on 4K resolution in filmmaking. What are the longterm ramifications of 4K for filmmakers? Is it just a fad that isn’t going to stick around? All this and more in our detailed look at 4K filmmaking.

Indie or independent filmmaking is a name we give to a different way of producing and distributing new movies. Usually, this means that they are not made by any major corporation in the film industry.

Indie films also have different contents or styles, because it’s possible that the filmmaker was able to inject more of his vision into the film, since he doesn’t need to justify himself to those big producers. Thus making it more artistic.

Normally, the teams are smaller and know each other better. Sometimes it’s possible that the same team works together in all their movies.

And it’s impossible to forget that there are much lower budgets involved in indie filmmaking compared to the major producers. Also, in distribution, these movies typically don’t go to movie theatres, neither follow the mainstream way of distributing them.

Indie films generally go to festivals (national or international), or focus on other smaller distribution methods in order to make people see them.

The budget that we’re talking about is often funded in large part by the filmmaker themselves, often with some donations and funded from other sources. However, the financial effort that many indie filmmakers need to make, they can actually put your own idea into their film, as opposed to having to follow a producer’s vision 100%.

Evolution of the medium

First, we had the beginning of sound and following that came colour. In the recent past, digital cinema, 3D and now the new 4K resolution have been developed.

So how about that in plain English?

Well, pixels are nothing more than little dots that together create an image. If you have more dots in the same space that you previously had, this should mean a better quality to your image. As we can see in this graphic from Sound & Vision: 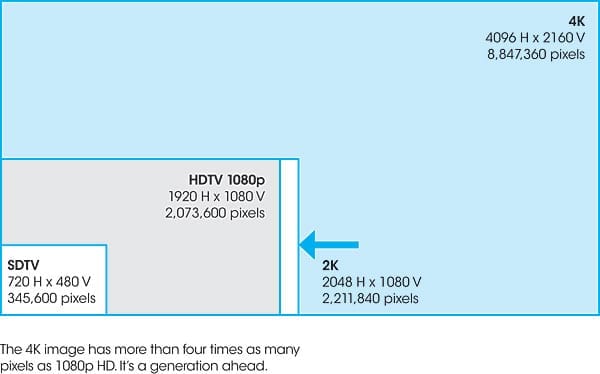 What does this actually mean?

It means you can see better colours, more rich and vivid, better contrasts with more life-like detail. At least, that is what should happen. For filmmakers this means a lot more.

The Trouble with 4K

Filming in 4K is quite expensive at the moment. Unlike the advent of digital that enabled more people to use it since it lowered the barrier of entry to start filmmaking (compared to the expense of shooting in film stock.

On the other hand, 4K filmmaking is on the more expensive side. At least, right now.

4K is seen by most filmmakers and those in video production as a luxurious upgrade. It is a technology that is still in development and that implies it’s going to get better with time, as well as the cost decreasing. As with seen with Moore’s Law over the past four decades, anything that’s digital increases in power as it directly decreases in size and expense.

The continued evolution of 4K also means there will be more things built around it, like more specialized editing platforms and storage solutions, as well as specialist lenses will be needed at times.  But for now, the cameras needed to record in 4K, or the capacity of storage you need are hard to reach for those who don’t have a lot of money or a big budget.

Also, and more to the point, there aren’t yet many places where you can actually show your movie in 4K, because most places don’t have the right screen, or projector. And even at home, 4K televisions are still new and many people don’t have them. In fact, ask a large cross-section of people in the developed country and lots will not even be familiar with 4K! Still more would see 4K as another fad that won’t come to widespread fruition like betamax, HD discs (vs. Blu-ray) or 3D TVs. 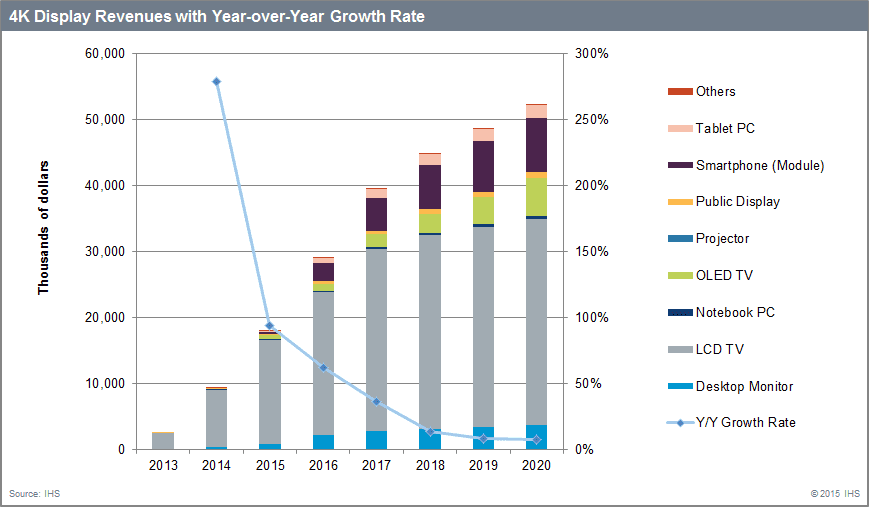 This issue is even more evident in the video production space, where creating a 4K finished product for a client is even harder to screen on their end. You may as well be giving them a deliverable that’s a space capsule from a futuristic alien race!

When we try to put 4K resolution and indie filmmaking together, it can be the hardest task at the moment. Like I mentioned earlier in this article, indie filmmaking normally doesn’t have big budgets and if you what to film in 4K you need to have money to do it.

So how can you film in 4K if you don’t have money to do it?

But will this really affect independent films? For now, I don’t believe it.

This type of filmmaking is still new. People in the industry can probably understand the difference if they are watching a full HD film compared with a 4K film, but even they sometimes don’t see the changes.

So, when we talk about regular people that go to the theater to watch a movie once in a while, it will be very hard for them to distinguish one from the other. Often the human eye can only even make distinctions like this if the two pieces are set side by side.

Here’s an interesting example with HD vs. SD:

Some would say we’ve already reached the peak of what our eyes can tell the difference between. Is 4K really going to make a difference, if our eyes already see at their best?

Still, for those who are constantly in the market for the latest gadget (and 4K TVs are surely a shiny new gadget, if there ever was one!), then 4K is something that will become more and more relevant. And, as research shows, there are a lot of people looking for shiny new gadgets in this marketplace.

This graph from Business Insider shows the rates of 4K adoption vs. HD in North America: 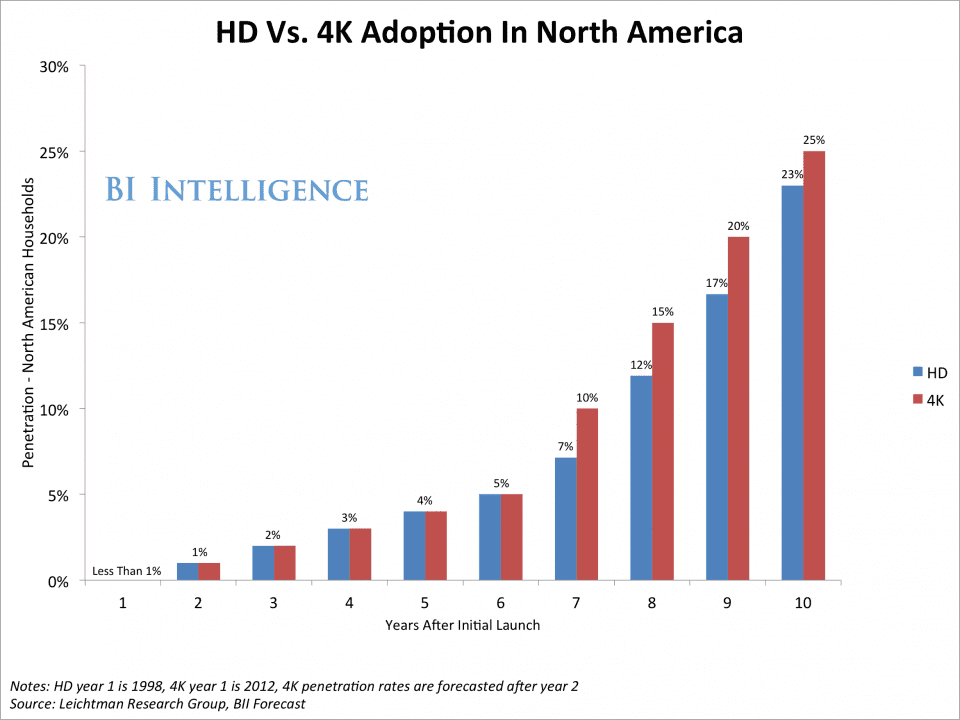 Looking to the future

Indie filmmakers can be a little more assured that, for now, making this drastic and luxurious change to 4K isn’t a necessity.

But it remains an option. And potentially an option that will become more and more relevant as time goes on.

Obviously, with time, 4K will be used more and more, and with that it will probably become less expensive. We’ve seen that with lots of technologies in the past.

If what matters is the spectator, they probably will pay more attention to your story than how many pixels you’re using. Especially when we are talking about full HD or 4K, that even a cinephile probably won’t be able to tell difference between.

Nevertheless, when we talk about the industry itself, it probably will make a difference if you mention your film is in 4K.

But is that the most important thing?

If your budget doesn’t allow you to film, edit and store in 4K, but you do it anyway, this probably means you will have to cut your budget in other places that perhaps will truly change your film and not in a good way.

I think most indie filmmakers will have more important things to think about and to spend money on than 4K technology, at least at the present moment. Therefore, you can and should wait a bit more to make the move to 4K.

Probably in a couple of years 4K will be more commonplace and we’ll see a proliferation of it throughout theatres and homes. It will possibly become less expensive and easier to access, but even then you need to understand that their probably won’t be such a big difference to the audience.

What is comes down to is this: is 4K currently essential in the indie filmmaking arena?

To that I’d answer, most probably.

For what it’s worth, I’ve never spoken to anyone in the industry that will choose a bad movie made in 4K over a good one not in 4K.

So, for now, I believe there isn’t a future to 4K in indie filmmaking in the immediate term. But indie filmmakers have a lot more to worry about than figuring out 4K. Fighting against the mainstream industry it’s a very difficult thing to do, since they are very powerful.

Buying new equipment that will be expensive and not bring you major differences at the moment, will take away from the focus of what really matters to indie filmmaking: storytelling.

Someday, possibly, 4K will be a major part of filmmaking (be it indie, or otherwise), but that won’t happen anytime soon.

The best thing to do is save your money and invest in your story, your actors, your locations, etc. Those things are far more important to indie films than 4K resolution is right now.

I hope this article on the future of 4K resolution in filmmaking has been helpful. What’s your opinion on 4K filmmaking? Is it here to stay? Is it just another fad that won’t stick around? Let us know in the comments below. And please feel free to share this article using the share buttons below.

How To Identify Cast When Breaking Down Script

How To Produce a Movie: The Essential Guide

Positivity, Your Identity and How It Relates to Filmmaking

What Is Stop Motion Animation? Definition & Examples Of The Technique

What Is a Storyboard? Definition & Examples Of This Technique