Should you go to film school? And, if so, what are the best film schools in the world?

We’ve asked the question here on Filmmaking Lifestyle in the past. The answer, in my opinion, is that going to film school is far from a necessity.

What Are Film Schools?

Film schools are a great way to learn about the craft of filmmaking.

They offer many different courses for all levels and types of students looking to get into the film industry.

Some teach how to shoot film from a cinematography perspective, some teach editing, sound design, producing, screenwriting, etc. The list goes on.

The best thing about film school is the connections that a student can make there. You work closely with talented future professionals who will make great connections as you grow your career.

Many great filmmakers have succeeded without going to film school.

And many top video production companies have been setup by those who are self-taught and don’t have any formal training.

There are, however, many reasons for wanting to go to film school.

Some people enjoy and thrive in a structured learning environment, some people like being told exactly what to do and how to do something, and still, others go to film school for the benefits you get networking and making contacts.

For those who do want to go to film school, here is a list of the 9 Best Film Schools In The World.

Traditionally, the Conservatory accepts 28 students – called Fellows – per year for most disciplines and 14 for the Design and Editing disciplines. Each discipline’s program runs two years in length.

First Year – Fellows from all disciplines work on at least three digital video or high definition short films (up to 20 minutes), referred to as ‘cycle projects’.

Each of these first-year projects is accomplished by Fellows with a minimum of oversight from the senior faculty.

The purported goal is to stimulate a flexible and creative approach to filmmaking within imposed budgetary constraints and without the crutch of seasoned oversight.

These ‘cycle projects’ make up the core curriculum of the first-year experience and amount to a ‘boot camp” of filmmaking that simultaneously challenges and invigorates the Fellows involved.

Second Year – Most Fellows work on at least one thesis short film, shot on digital video, high definition, 35mm film, or 16mm film, and develop portfolio materials (such as a reel and a feature film screenplay).

Screenwriting Fellows have the option of writing two feature-length screenplays instead of participating in a thesis film.

They are responsible for raising the bulk of their own financing for these projects (average budget is $30,000), and must adhere to standard industry regulations, such as SAG charter rules, during filming.

The senior faculty of the conservatory oversee the development of the ‘second-year’ projects and monitor their development in a manner similar to what might be expected of an Executive Producer. 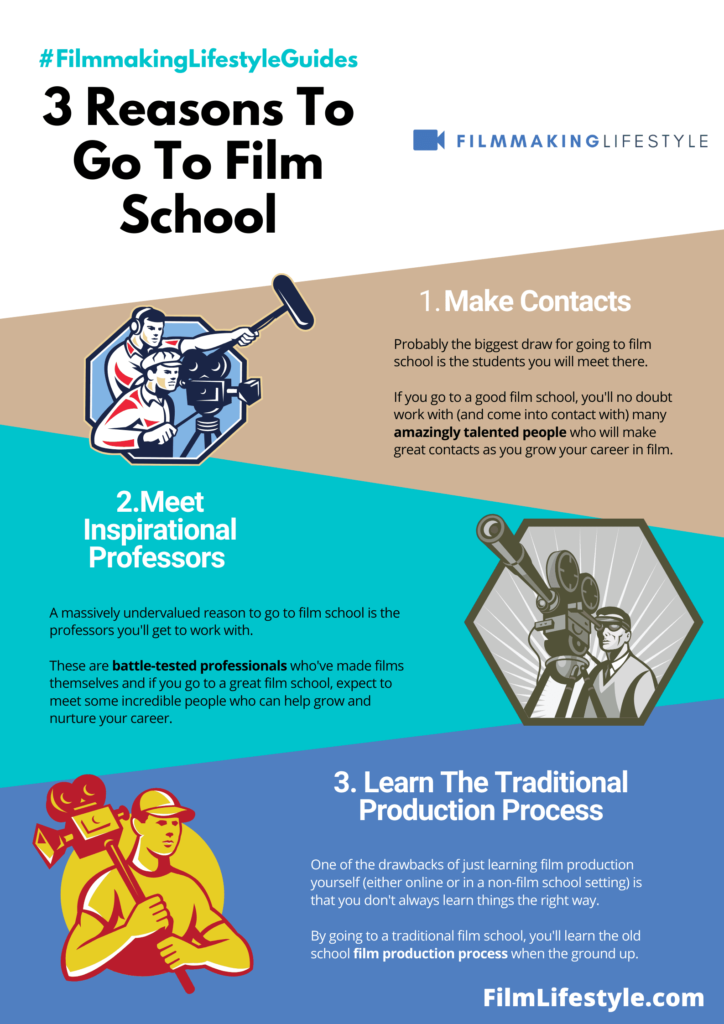 The UCLA School of Theater, Film and Television (UCLA TFT), is one of the 11 schools within the University of California, Los Angeles (UCLA). It is located in Los Angeles, California.

Its creation was groundbreaking in that it was the first time a leading university had combined all three (theater, film, and television) of these aspects into a single administration.

The graduate programs are usually ranked within the top 3 nationally, according to the U.S. News & World Report.

Among the school’s resources are the Geffen Playhouse and the UCLA Film & Television Archive, the largest university-based archive of its kind in the world, celebrating its 50th anniversary in 2015.

The Archive constitutes one of the largest collections of media materials in the United States — second only to the Library of Congress in Washington, D.C. Its vaults hold more than 220,000 motion picture and television titles and 27 million feet of newsreel footage.

With 140 faculty members teaching 335 undergrads and 296 graduate students, the teacher-to-student ratio is about 1:5.

The USC School of Cinematic Arts is a private film school within the University of Southern California in Los Angeles, in the U.S. state of California.

Additional advanced programs include the Media Arts and Practice PhD Program, the Peter Stark Producing Program, and the Business of Entertainment (offered in conjunction with the USC Marshall School of Business MBA Program).

It is the oldest and largest such school in the United States, established in 1929 as a joint venture with the Academy of Motion Picture Arts and Sciences, and has been ranked as one of the best film programs in the world on several occasions.

How To Get Into Film School

• Explore the different film schools and how they are ranked.

• Learn about the admissions process including tips for submission, transcript requirements, etc.

• Get in contact with alumni and admissions directors of schools.

• Learn what your competition is doing.

• Score high on your entrance exams and ace the interviews!

The New York University Tisch School of the Arts (known more commonly as Tisch or TSOA) is a center of study in the performing and media arts.

Founded on August 17, 1965, Tisch is a training ground for artists, scholars of the arts, filmmakers, and creative entrepreneurs.

The school merges the technical training of a professional school with the academic resources of a major research university to immerse students in their intended artistic disciplines. It is located at 721 Broadway in Manhattan, New York City.

Tisch School of the Arts was founded in order to provide conservatory training in theatre and film, in the context of a research university.

The school created additional departments such as dance, theatre design, and cinema studies within a few years.

In 1985, the school’s first dean, David Oppenheim solicited a donation from Laurence A. and Preston Robert Tisch that made possible the acquisition and renovation of 721 Broadway, where most of the school’s programs are housed.

In recognition of the generosity of the Tisch family, the school was renamed Tisch School of the Arts.

The National Film and Television School (NFTS) is a film school established in 1971 and based at Beaconsfield Studios in Beaconsfield, Buckinghamshire. It was at number 1 in the 2014 Hollywood Reporter top 15 International film schools.

Its community of students makes around a hundred films a year on courses that are over 90% practical and unlike courses offered at other UK film schools.

As of 2013 it had around 220 full-time students, with a further two dozen part-timers on the Script Development course and about a thousand a year on its short courses.

It is the only film school in the UK with its own film and television studios.

The BBC stated that the NFTS was the “leading center of excellence for education in film and television program making”, and noted that it was “relevant to the industry’s present and future needs.”

British Film Magazine once described the NFTS as being one of the few schools to come “very, very close” to guaranteeing a job in the film industry, and named its leader (Powell) a “maverick”; Filmmaking.net named it one of two films schools outside the US which had such a high international reputation.

In 2013 the National Film and Television School became the first film school in history to win all three of CILECT’s (the main international film and TV school association that includes 160 schools from 60 countries) competition categories (the winners were “Head Over Heels” in Animation, “After” in Documentary, and “The Mass of Men” in Fiction).

It is part of PSL Research University, a Paris area-based world-class federal research university formed from highly selective art-, science- and humanities-focused higher education institutions among the most prominent in France.

Based in Paris, it offers courses balanced between artistic research, professional development and technical training.

The teaching language at most of the programs at FAMU is Czech, but FAMU offers also programs in English: summer workshops, one-year Academy Program, Special Productions – or MFA program Cinema in Digital Media. According to The Hollywood Reporter weekly, FAMU is the best film school in Europe and No. 11 in the world.

FAMU’s main building is situated in an attractive location in the historic center of Prague.

Each autumn, FAMU organizes the Famufest festival, a showcase of its students’ current work as well as an accompanying cultural program and visits by prominent figures in filmmaking.

All of these directors would become very successful in the following decades, prompting the coinage of the term Praška filmska škola (“Prague film school”), or Praški talas (“Prague wave”), which is sometimes considered a prominent subgenre of the Yugoslav cinema.

The film school is the largest institution specializing in tertiary education for film and television production in Asia.

The academy has earned international recognition for its achievements in film production.

Established in May 1950, the Beijing Film Academy was first named Performance Art Institution of the Film Bureau of the Ministry of Culture. During its first year, 38 students enrolled.

For the next five years, the school was renamed thrice – Film School of the Film Bureau of the Ministry of Culture in July 1951, Beijing Film School in March 1953 and finally, Beijing Film Academy on June 1, 1956.

Upon its first establishment, the academy contained 2 schools – the School of Photography and the Animation School with the associated departments and their subsequent specialties.

The Screenwriting Department was one of the earliest departments to be established at the academy in 1951.

Gradually, the academy expanded its number of schools and departments. On September 14, 1950, BFA offered its first undergraduate course in performing arts.

The course attracted a class of 30 students, many of which were notable figures in film and television. Due to its success, BFA established the Performance Institute in June 1956.

In 1952, BFA offered its first programs in sound recording. The Department of Sound Recording was officially founded in 1959.

BFA began offering a two-year course in film and television production management in September 1955. Although the first class only graduated 28 students, the popularity of the course grew, and the Department of Management was formally established in 1987.

In 1966, the Cultural Revolution brought hardships for schools throughout the People’s Republic of China. BFA was equally affected; many of its professors left the academy.

The London Film School (LFS) is a not-for-profit film school in London and is situated in a converted brewery in Covent Garden, London, close to a hub of the UK film industry based in Soho.

The LFS was founded in 1956 by Gilmore Roberts as the London School of Film Technique in Brixton and later moved to Charlotte Street, becoming The London Film School under Principal Bob Dunbar.

From 1971 to 2000 it was known as The London International Film School, and reverted to the name London Film School in 2001.

It offers MA degrees in Filmmaking, Screenwriting and, in partnership with the University of Exeter, a unique MA in International Film Business and a PhD in Film by Practice, recruiting from all over the world.

It also offers an expanding range of short and part-time professional development courses under the LFS Workshops banner.

LFS is the only graduate-only film conservatoire specifically constituted as an international community; around 75% of its students are from outside the UK. The LFS is one of three UK Creative Skillset “Film Academy” Centres of Excellence.

The school’s current director is Jane Roscoe and its current chairman is Oscar-nominated Mike Leigh O.B.E.

Working With Videographers: Notes From a Wedding Photographer

The Best of Filmmaking & Video Production May 2016

How to Make a Personal Film: One Man’s Journey to Make an Autobiographical Film

How Long Does It Take To Make A Movie? The Definitive Guide