Breaking Down a Script: A Complete Guide To Script Breakdown

Script breakdown is an initial estimate of the time required for all tasks necessary to complete a project.

The script breakdown includes estimations of how long each task will take to complete, and how much time it will take for various team members involved in the project.

Estimating script breakdown can be difficult as there are many variables that can affect the timeline such as unforeseen events or weather conditions.

BREAKING DOWN A SCRIPT

What Is Breaking Down a Script?

Script breakdown is the process of separating a script into each individual scene.
It’s important to understand that this does not just include dialogue, but also blocking and stage directions.

Breaking down a script may seem like an easy task at first glance, but it can be quite time-consuming once you get into the nitty-gritty details of what everything means.

If you are unfamiliar with any terminology in your script, then it is best to look up Google or Wikipedia for definitions or explanations before proceeding with a script breakdown.

A script breakdown is a list of the scenes in a screenplay with their corresponding page number.

It’s an important document for any filmmaker or screenwriter because it helps them know exactly what they’re working on without having to re-read the entire thing again and again or search through various files on their computer looking for specific information.

Script breakdowns are also helpful if you want your production team to have access to all of the work so they can do things like schedule filming days more efficiently, manage time better, and make sure everything goes smoothly during production.

Script breakdown is a term used to describe the process of breaking down what happens in a script into individual shots.

Script breakdowns can help filmmakers and producers know how many days they will need to shoot, as well as help them determine costs.

Script breakdown is an often misunderstood part of screenwriting. It’s not just a list of all the parts in script format, but instead, it is a guideline for how to break down your story into individual scenes and acts.

Script breakdowns can be used as a tool for visualizing what you’re writing or as an outline for future drafts.

We’ll explain exactly what script breakdowns are and why they’re so important. 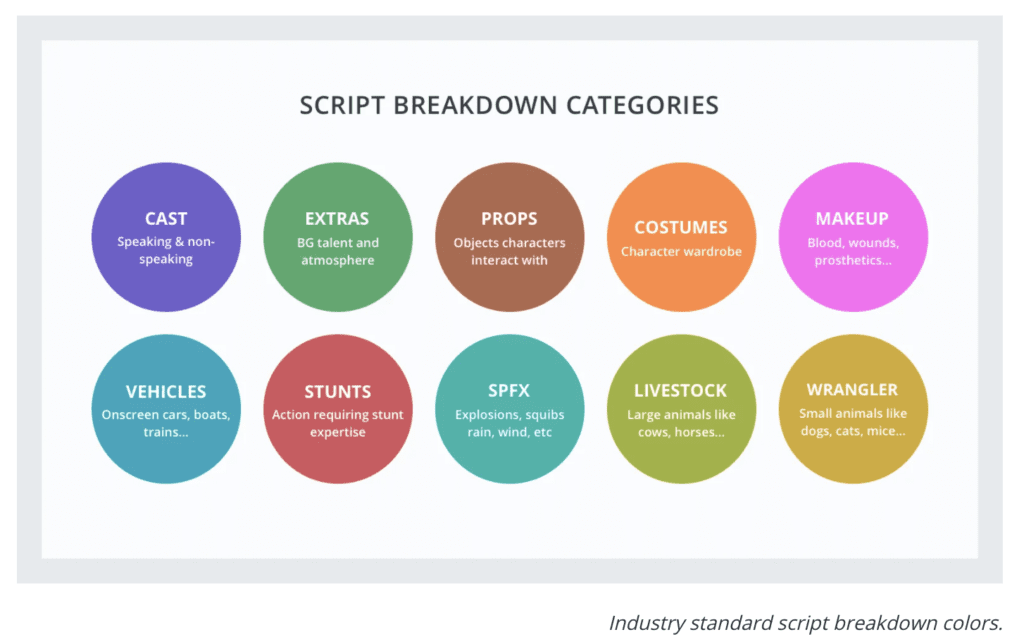 What’s In A Script Breakdown Sheet?

The first time I saw a script breakdown sheet, I had no idea what it was. It turns out that this is an invaluable part of being a production assistant on set.

As you know, there are dozens of people who work behind the scenes to make your favorite movies possible.

A script breakdown sheet is a document that contains the script’s dialogue and descriptions of all the scenes.

It can be helpful for actors, directors, or cinematographers to get a good overview of what will happen in each scene.

Scripts are often broken down into “scenes” which are sometimes numbered with Roman numerals (I, II) or Arabic numbers (1, 2).

These break-downs can also contain additional information such as camera angles and props needed for specific shots.

Actors may use these sheets to prepare their lines before shooting takes place so they know when to say them and how other characters react.

Directors may use these as well to help create an accurate shot list for filming while cinematographers need the information about the scene, such as location, time and characters in it; camera angles; dialogue; props needed for the scene (such as furniture); and stage (or set) direction.

The person who creates a breakdown sheet also notes any special effects or computer-generated images required for the scene.

What Is A Script Breakdown Used For?

Script breakdowns can be helpful for those who are looking to get into the film industry because they provide an overview of how each element should be formatted.

In addition, having a good understanding of what goes into creating a script will help you when it comes time to write your own story.

Script breakdowns are used to break down the screenplay into a list of every scene and how long it takes. This is done for script analysis, budgeting, and scheduling.

How To Make A Script Breakdown

Do you ever feel overwhelmed by your script? You’re not alone! It can be hard to stay focused on what needs to get done when there are so many tasks.

The script breakdown document is usually created by the production manager or director and includes all scenes that will be shot on the day or during the shoot.

Making a script breakdown is a process that can be daunting. It’s important to keep in mind what you want the reader to take away from it, and to make sure you’re not stating the obvious.

Script breakdowns are a must for any production company or film crew. They help to keep your project in order and give you the opportunity to see how much work is needed from every department.

Don’t know how to start breaking down your script?

Start by looking at the logline. What is the story about?

What are the characters trying to do and why does it matter?

It is important to take a step back once in a while and see the bigger picture. When we do this, we will be able to see where improvements need to be made.

The traditional Hollywood script format is outdated and in need of reform. Writers use a variety of different formats to tell their stories, but the most commonly used are screenwriting scripts, TV scripts, stageplays, and novel manuscripts.

Each has its own formatting style that must be followed for submission to production companies or publishers.

It’s common advice that you should always start your screenplay with a hook. But what if the audience is not given any background information on what they’re about to see?

In these instances, it’s best to provide some context by re-writing the script intro to be more engaging and informative.

It’s always helpful to have all the information organized in one place so you don’t miss anything. This template should provide a good starting point and keep your productions on track!

If there are more than two Client Names include them here as well: Example: Client A, Client B, Client C…) -Status of Script Draft or Final Script PDF available?

From Scene Breakdown To Shooting Schedule

It can be a daunting task as an indie filmmaker to tackle the responsibility of scheduling and organizing your production.

On the surface, making films seems like a glamorous profession. But anyone who has ever worked in film knows that it’s actually quite difficult and time-consuming.

Shooting schedules are a crucial part of the film production process. They outline when and where each scene will be shot, and how many takes for each scene are required.

Shooting schedules help make sure that everything is done in an efficient way so that filming can take place as quickly as possible.

If you’re interested in getting into filmmaking, it’s important to know what goes into shooting schedules so you can be prepared for this part of the artistic process!

There are a few things you need to first consider before moving on, such as budget and what type of shoot you’re doing (location versus studio).

You should also have some basic knowledge of preproduction, which can include locations scouting, casting, wardrobe styling, and props planning.

This is because these tasks help set the tone for your production and make it more successful. Once all that is done then it’s time for the actual shooting schedule!

A great way to plan this out is by writing down all scenes in order with their start times and end times then adding any breaks between them so that there isn’t too much downtime between shots.

How To Create Powerful Opening Shots In Your Films & Videos

How To Write Text Messages In a Screenplay: Formatting Guide

What Is Dramatic Irony? Definition, Examples & How To Use It

What Is Overstatement? Definition, Examples & How To Use Correctly

What Is Catharsis: A Complete Guide [With Examples]

How To Write Every Day: Tips, Techniques & Pointers [With Tutorials]