Today, we have an article by Megan Thomson of Mallard Productions, a video production company based in Scotland. She’s here to talk about video distribution and duplication.

It’s a topic we’ve touched on before at Filmmaking Lifestyle, but it’s an important one and Megan brings a new perspective to the subject.

Video Distribution and Duplication: An Ending & a Beginning

For filmmakers, getting your work seen by as many people as possible is usually a major goal and one of the most exciting aspects of creating work is when people see and engage with it.

By distributing your content, you are able to share your message far and wide. Video is currently one of the most powerful communication mediums available, so making sure you distribute it correctly is vital to the success of the video you’ve made for a client.

How should I distribute my video?

Before distributing your video you must ask yourself certain questions as the type of video you’ve made will affect the best way to distribute it.

Is it a general promo video that highlights a company’s strengths and shows them in their most positive light? Sharing to their social media is a great starting point. Their Facebook page is a great idea.

Is it a short news piece? This might be more suited to a site that enjoys regular updates with others also linking to the same topic, such as Twitter.

Is it an in depth look at a particular company or business? A longer video is better to distribute on DVD, as these are more likely to be watched for training/educational purposes by a company’s employees/institution’s members on a computer or television in comparison to a phone or mobile device. Downloading lengthy files via the internet isn’t always practical.

Who is your target audience? A professional videographer (Ed. note: this is the guest writer’s own video production company) will always consider the audience that they’re making the video for in the first place. This will have the biggest impact on the choice of a video distribution method.

Is your key demographic more likely to engage with your completed video on the internet or on a DVD player? If you’re aiming to reach a broader audience, it could mean using outreach efforts like contacting influencers in order to broaden the scope of the amount of people who see your work. This, of course, is something that you’d need to plan out effectively with your client and/or the company you’re creating the video for. 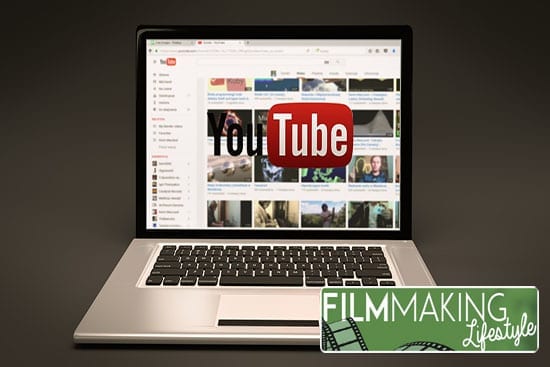 Using multiple distribution methods together can work well. For most projects, uploading your video to a client’s website and social media should just be the start. Ensuring you choose the most effective distribution channel or platform for the specific audience you’re targeting should be paramount and will ensure you enjoy maximum reach for your video.

It should also be stated here that distribution methods are closely connected with marketing the video, and this is something that one should consider when approaching their video production company as more of a video marketing/all-services boutique operation.

With that said, let’s look at a few specific distribution options that you have:

This is the most common form of distribution in modern times. Uploading to Youtube or Vimeo, or another video sharing platform, makes it easy for your audience far and wide to see the finished video.

Video producers are now able to distribute their content to mass audiences online thanks to sites such as Youtube, Vimeo and Facebook (with their built in video platform) in a way that was once only available through traditional broadcasting methods.

Distributing your content via the internet gives you the opportunity to global visibility, though it’s important you distribute your video in a format that can playback easily. Once your content is on the web, it can be redistributed through sharing taking on a life of its own and even leveraging viral aspects.

Though the disc has lost value in favour to streaming, the disc definitely isn’t dead, with Netflix’s DVD market still continuing to be a billion dollar business. Although, using the Netflix example, DVDs are losing pace with streaming and it’s happening pretty quickly as this graph from Bloomberg shows: 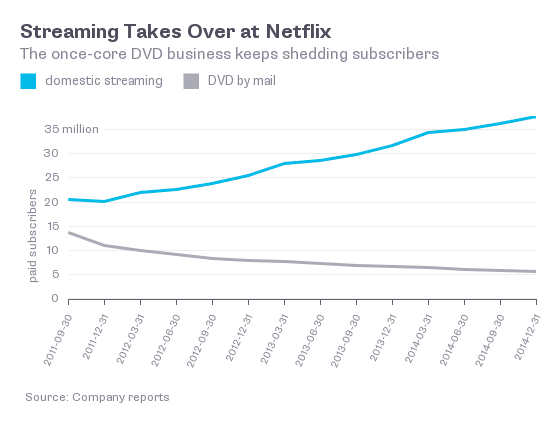 However, it’s no secret that a meticulously encoded disc will deliver a better and more detailed presentation than any streamed version. It’s also a much preferred viewing scenario for companies who want to offer a physical marketing piece to prospects, or those who don’t have lightning fast connections and just need to show a video to someone quickly.

When considering disc distribution, it’s important to know the differences between DVDs and Blu-rays. Let’s look at some stats on DVD and Blu-ray technology:

It’s immediately obvious that Blu-ray is the superior technology; this is no surprise as it’s nearly ten years more advanced than the humble DVD. Though it should be firmly pointed out that the DVD is still the dominant medium in households, which is worth considering when duplicating your content.

If you are planning on a large scale distribution of your video on disc, you should consider working with a professional duplicator. They are able to produce thousands of DVDs, Blu Ray discs and USB sticks containing your film. These can then all be printed and delivered directly to you or your distributor.

The price depends entirely on the amount that you want to duplicate so it’s advised to contact the professional video duplication company (Ed. note: again, this is the guest writer’s own video production company) with an idea of the number of copies you want in order to receive a quotation. Depending on the volume required, professional duplication usually takes around two to three weeks from the time they are ordered to the time they arrive.

A more modern distribution option is using something like MediaZilla. MediaZilla, and similar sites, are revolutionizing online distribution methods for videographers and filmmakers.

Whether it’s an indie film, a corporate/promo video, or a wedding film, MediaZilla offers a premium approach to delivering at the client level.

With MediaZilla, you can create professional videos with interactive menus that act as a sort of online DVD. You can also easily export projects to DVD, Blu-ray and USB.

One of the most exciting things is seeing the content you’ve created be viewed time and again by your chosen audience. The ease of ability to duplicate and distribute video is making it more possible than ever before for your message to reach wider audiences.

I hope you’ve found this article on video distribution instruction. If you have any questions or comments, please feel free to write a comment below. Also, we’d really appreciate it if you shared this article with your social audiences using the share buttons below. Thanks for the reading!

7 Ways To Use Content Marketing For Your Video Production Company

24 Things To Do Right Now To Improve Your Filmmaking Today

Psychology Of Filmmaking: What You Need To Know To Make Your Ideas Stick

What Does a Director Do? A Complete Guide