What Is Pathos: Definition And How To Use Pathos To Improve Your Commercials

Ever struggle to increase the conversion of your marketing campaigns? Does the idea of getting more sales and leads fascinate you? Then you should consider the principle of Pathos.

Sound a little daunting? Don’t worry, we have your back.

You probably spend tons of hours on your commercial, pitch, or sales copy, often to no avail. It can be frustrating.

Although that’s the case, you can turn the tables around in your favor. It may seem impossible given where you are at right now, but trust me, it’s not.

With only a few tweaks, you can improve the persuasiveness of your marketing campaigns. Luckily enough, it’s simple to do that — it’s remarkably effective too.

Then how exactly will you boost the persuasion of your campaigns?

Aristotle has got your back.

A little over 2000 years ago, this Greek philosopher discovered the modes of persuasion, which are also known as the rhetoric triangle. It was named as such because there are three of them.

Here are their explanations in a nutshell: pathos persuades the audience through emotions, ethos through social proof, and logos compels the audience by using facts and statistics.

In this article, I’m going to tell you all you need to know about pathos. You will have a practical grasp of the concept, along with the information you need on how to use it.

Pathos is the persuasive technique that targets people’s emotions.

These emotions can be negative or positive — it doesn’t matter because both feelings have enough power to trigger action.

On the positive side, it can be joy, love, hope, or inspiration, and on the negative angle, it can be sadness, guilt, or even anger.

Unlike other persuasive techniques that focus on facts and credibility, this one focuses on the specific prospect you communicate with through your ad.

Pathos is a rhetorical device that appeals to the emotions of an audience. It’s often used in advertising campaigns to evoke feelings in order to change people’s minds or behaviors.

Pathos can be created by using emotions such as anger, humor, and sadness. It’s often seen in speeches given by public figures to sway the opinion of their listeners via appealing to feelings and emotions.

It’s important to remember that pathos is not about manipulation. Instead, it’s about getting your audience on your side in order to move them to understand you better. Smart brands know this well.

Pathos is one of the three main Rhetorical Appeals (the others being Ethos and Logos), and it can be described as an emotional appeal.

Pathos points out your audience’s innermost feelings. It stirs up and even agitates their emotions to make them act on something.

Pathos is used by many marketers and advertisers, but it isn’t only limited to that field. It also extends to domains like literature and art.

In these areas, the writer or artist will sympathize with readers, which, in turn, will inspire emotion from the audience. Pathos relies on the understanding that people’s emotions are often more powerful than their intellects.

That’s all it’s about, and despite its simplicity, it’s powerful.

Before we go any further, check back up at paragraph 3 of this very article: the one beginning, “You probably spend tons of hours…”

That, right there, is an example of me using the technique of Pathos, right here in this very article.

Originally, pathos is a Greek word, and it means suffering and experience.

As I mentioned before, this persuasive technique originated from Aristotle, the then Greek philosopher. He founded this technique alongside the other two, ethos and logos.

Aristotle cited in his book, Rhetoric, that pathos stimulates people’s emotions and makes them resonate with those of the advertiser, speaker, or whoever may use them.

Despite all this, Plato, the predecessor of Aristotle, had his viewpoint on Pathos.

He believed the persuasive technique should be used cautiously because if it’s used without much thought, it could do more harm than good.

From his perspective, it could manipulate an audience in a negative way — which wouldn’t be right.

The Importance Of Pathos In Advertising

Let’s be honest here: some people are too reluctant to act on your ad unless you play around with emotions that deeply connect with them.

That’s why you need pathos. It will help you come off as friendly and authentic.

You Will Gain People’s Trust

People want someone who truly understands them, someone who knows their pain points and desires. If you show that in your ad, you will most likely gain people’s trust.

From your audience’s perspective, they will relate to you. You will have been in their same situation before.

If it’s a problem, you will have been through the same thick and thin. If, on the other hand, it’s a desire, you will have the same ambitions and outlook towards the future.

That connection is the important thing here because people are more inclined to trust you rather than a regular Jane or Joe who isn’t related to them. 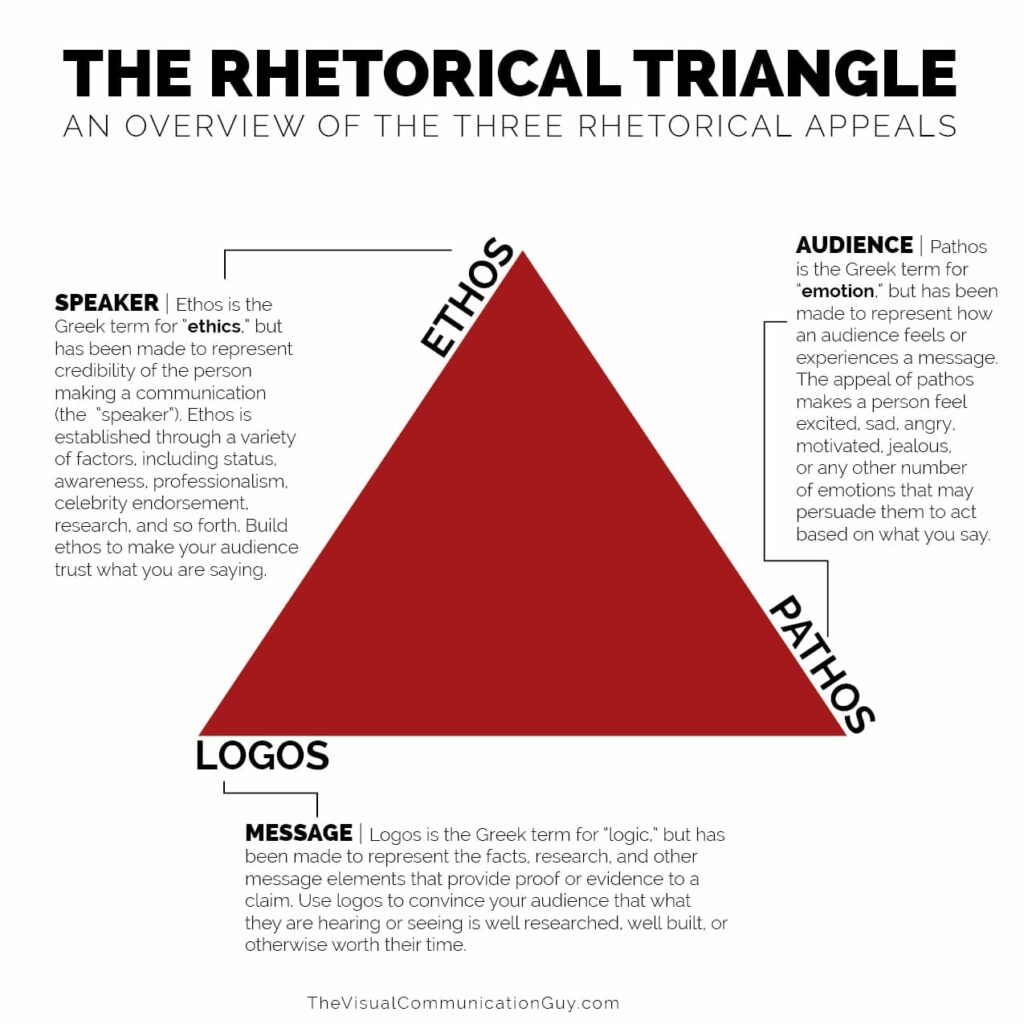 You Will Get Over Common Objections

Here is the thing: people will most likely question your authority if you speak on a topic without deeply connecting with them.

Even if they know you are speaking the truth, they will try to find flaws in your ad or argument. They will try all they might, only to disagree with you.

You wouldn’t want that — it will hurt your conversions.

But with pathos, thankfully, you can get over that without much hassle.

If you use this technique, you will connect with your audience, feel the same emotions, and in the end, influence them to act on your appeal.

As I already mentioned before, pathos helps you build trust and get over common objections.

Seeing that it does all this, we can conclude that it makes you seem more genuine.

How can you not be if you’ve already got people’s trust and have got rid of their disapprovals?

Everything you say will appear (and be!) real — and for this reason, they won’t take you for granted.

How To Use Pathos To Level Up Your Persuasion

If you ponder the benefits of pathos that you will experience, you will notice this technique can be a game-changer for your persuasion.

To that end, I’m certain you are ready to know how you can use it in your marketing.

Don’t worry — I have got you covered.

Before I go any further, let me begin by saying this: PAS isn’t only for sales copy or anything related to copywriting.

Yes, it works for those purposes (and it’s commonly known for them only), but trust me, it isn’t limited to that.

The PAS framework also works on ads, commercials, speeches, etc. In this case, you can use it to elicit pathos in your persuasive advertising.

The P stands for the problem. When making your ad, commercial, or any form of literature, identifying your audience’s problem is crucial. It shows you understand your audience and you know their pain points.

So put that difficulty upfront and show your audience you realize what stings and depresses them the most.

The A stands for agitation. Once you have pointed out their problem and shown them you know it, agitate it then.

Stir it up and make it hurt. Rub salt into the wound.

If you have a story, tell it. Show them the consequences of ignoring your appeal.

If you do so, you will connect with your audience and resonate with them on a deeper and personal level.

Lastly, the S stands for the solution. You have introduced your problem, agitated it, and emphasized their emotions. 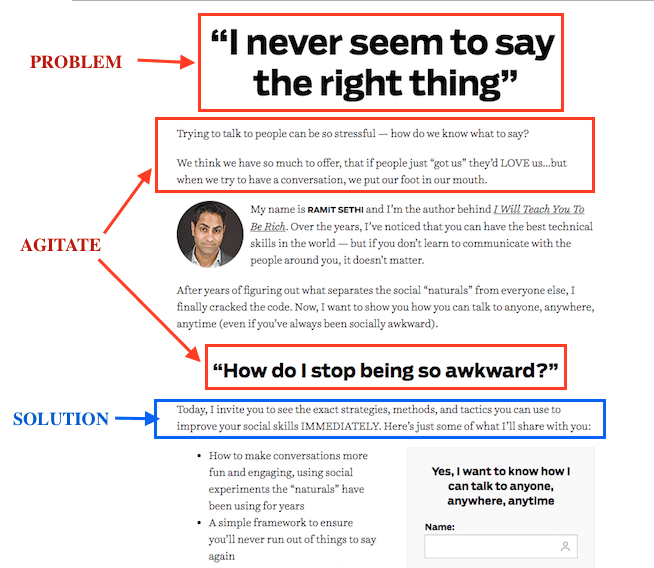 It’s simple — show them your offer. The first 2 steps allow you to connect with your audience emotionally, and the last one orders them to act on your appeal.

That’s what you are after, right? So go ahead — cite your offer.

With all these steps considered, you will successfully target your audience’s emotions and invoke them to act on your call to action.

Another Way Of Connecting Your Audience

The PAS formula focuses on negative emotions. You will be focusing on people’s problems and agitating them.

Still, you can also focus on the positive side. Instead of starting with a problem upfront, kick-off with good vibes.

Cite the big picture, the big benefit your audience will get from your product. Promise them they will benefit from whatever you offer, but don’t stop there, prove it to them.

In doing so, you will relate to your audience’s interests and ambitions. This will allow you to connect with them emotionally.

How Do Companies Use Pathos In Their Marketing Campaigns?

When you look at how effective Pathos is, it comes with no surprise that most companies— whether small or big ones— use this persuasive technique.

An example of such companies is Coca-Cola. Well, this one focuses on the positive side for the most part.

Have you ever seen Coca-Cola commercials before? If you have, I’m certain you have noticed they only focus on the good vibes.

They instill the feeling of belonging, happiness, and togetherness. Everyone loves this feeling, and seeing that Coca-Cola targets it, the company connects to people’s emotions to a great extent.

This Coca Cola Super Bowl is a prime example of Pathos in action:

The same goes for Heineken, the popular beer company. This one uses the feeling of happiness and humor at the same time.

Everyone wants to have laughter now and then. Heineken targets that, and this allows the company to also connect to its audience’s emotions.

You have seen the importance of Pathos in your marketing, and you have also seen how you can apply it to your marketing campaigns.

This strategy is indeed useful, so you should use it more often. Focus on the positive or negative feelings of your audience— it will bring about the same results.

But be careful when targeting the negative emotions of your customers. When you present and agitate your problem, don’t do it to the point that you scare your customers away, or worse yet, upset them.

You should frighten them with a fear of missing out, but don’t go overboard. You also shouldn’t make them angry, because, at the end of the day, they won’t buy your product.

In the worst-case scenario, they will loathe it. What good would that have done? You would have hurt your brand’s conversions.

Don’t take me wrong here: negative emotions are useful. What I mean is you should target them cautiously.

So go ahead and use pathos in your advertising!

What is Ethos Definition: How To Use Ethos To Create Powerful Commercials

What Is Logos: Definition And How To Use Logos In Your Commercials & Ads

Indie Film Promotion: The Plight of the Indie Producer of the Future

Best Blogging Platform: How To Choose The Top Blogging Tool in 2022 [Complete Guide]

What Are The Clio Awards: Everything You Need To Know

Influencer Marketing: 11 Steps to Become an Influencer On YouTube