This is the 11th installment of this feature here on Filmmaking Lifestyle, where we chart the best-of-the-best from around the filmmaking and video production world. This article covers the best posts from August 2016.

Can’t believe it’s been nearly a year since I started this feature!

After being 3 days early for last months post, actually a little late publishing this one. It’s been a really busy month for me, with lots of weddings to film, as well as an unusual amount of corporate/commercial work for August.

Normally, August is a quiet month for companies, as it’s during the long school summer holidays, lots of people are away on vacation and it’s seen as a bit of a wind-down, chill out month. Not so at Filmmaking Lifestyle.

Just a couple of admin type things to kick-off with. If you following me on Instagram (and if you don’t, why not!?), then you’ll notice my account is mostly all about the filmmaking/video production/creative quote based posts. These posts have had a great reception, so I’m sticking with them.

Actually, now that I think about it, I haven’t done this before and this seems as good a venue as any. Whilst I have your ear, here are Filmmaking Lifestyle’s social accounts right now:

And as always, if you’d like to write for the site, you can check out the details and contact me at the Write For Us page.

So without further ado, let’s get into this month’s wrap-up and see the best posts on filmmaking and video production from around the web!

This was pretty cool. Guillermo Del Toro funded a $666 crowdfund project after a budding filmmaker tweets the director.

If you know Werner Herzog, then you know he likes to surprise. And surprise he does here in a funny critique of a Kanye West video: ‘This is Very Good Stuff’: Herzog Dissects, Praises Kanye West’s Infamous ‘Famous’ Video.

Meanwhile, on Filmmaking Lifestyle we had 5 Tips For Creating an Amazing Logo to start the month out. After that, we featured an article by Gio Orellana on finding your video business locus of control.

In another guest article this month, we learnt the 15 Tips to Start & Grow an Animation Video Company. And, without mentioned everything we had on FL this month as it’s been our business month to date, we rounded out August with 5 Things You Absolutely Need to Get Your Video Company Moving.

Oh, and this is (obviously) not from this month, but I saw it doing the round on the web this month, so it kinda counts. Here’s Akira Kurosawa’s advice to aspiring filmmakers:

Interesting article about ‘Sausage Party’ and how the directors Conrad Vernon and Greg Tiernan created the most outlandish animated film of the year.

Great news out of Kodak with word that Kodak Launches Super 8 Filmmaking Revival Initiative at CES 2016.

And, finally, yes you’ve heard that the Canon 5D Mark IV is on the way with the future release the talk of video production owners, photographers and indie filmmakers the world over. Well, Canon released a sneak preview of some footage shot in 4K with the new camera:

The Picture of the Month this month is a little different to normal. This one’s creative inspiration for, well, any creative, and not just limited to filmmakers and videographers.

Use this graphic to find out where your sweet spot is! 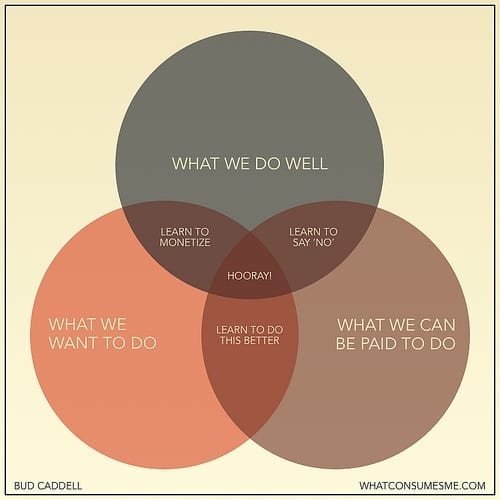 Have you ever wanted to see how those slow motion ‘burger coming together’ shots are made?

This month’s Video of the Month is something a little different:

Landing a Burger in Slow Motion

Moving From Photo to Video: How To Transition From Photography To Videography

Clients For Your Video Company: 9 Steps to Get More Clients Than You Know What to Do With

Indie Film Location Scouting: 7 Things to Look For When Scouting

Mise En Scene Elements: What You Need To Know