How To Pitch a TV Show: The Definitive Guide

When you are pitching a TV show to a network, it is important that you have your pitch down pat.

A well-crafted pitch will help sell the idea of your show and could lead to getting picked up for production.

Do not think that just because you’ve got an amazing idea in your head, all you need to do is tell people about it and they’ll buy it.

This may be true if it’s something simple like making a sandwich or doing laundry – but when we’re talking about TV shows, there are many factors involved in whether or not the network wants to produce your show.

The first thing is what type of genre does the story fit into? Network executives want their viewers tuning in each week for new episodes.

HOW TO PITCH A TV SHOW

What Is Pitching a TV Show?

The term ‘pitching a TV show’ is used to describe the process of getting an idea for a TV show accepted by executives.

A pitch usually includes some type of presentation, like a short video or live demo.

The goal is to get your idea approved and turned into a TV series with you as the writer, producer and/or showrunner.

What Is A TV Show Pitch?

TV show pitches are the first step in getting a TV show on air.

It’s a one-page summary of your idea that captures the essence of what your show is about and why it will be successful.

You should spend time strategizing how to make your pitch as appealing as possible; this includes crafting an engaging intro paragraph, giving compelling reasons for why you’re qualified to write or produce the series, and coming up with a catchy title.

The idea is to sell your idea in one minute – the shorter and more engaging the better. It’s a test of how well you can present your concept with clarity and personality.

But while pitching a TV show might seem like an easy task, it’s actually pretty difficult when it comes down to it.

You need to come up with a catchy title that hooks viewers, explain what the show is about quickly enough so they will want to stay tuned for more without confusing them.

And also make sure that there are clear conflicts in each episode, or else people won’t tune in next week!

A TV show pitch is a succinct summary of the premise for a proposed or current television series.

It previews what viewers can expect from the show, and tries to convince networks to buy it. This introduction does not take more than 60 seconds to read!

A TV show pitch is a succinct summary of the premise for a proposed or current television series. It previews what viewers can expect from the show, and tries to convince networks to buy it.

In order for this intro paragraph to be engaging it would need an introductory sentence that hooks readers into reading on so they can find out more about how they themselves could create their own TV show idea with these tips and tricks in mind! 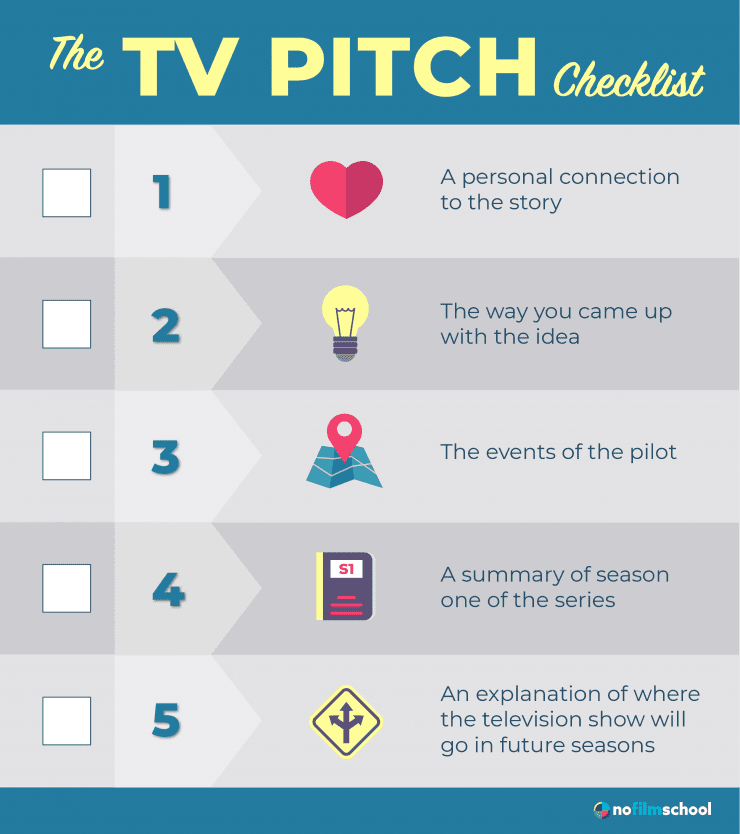 What Are The Parts Of A TV Pitch Packet?

What are the parts of a tv pitch packet?

The script is your story for the show.

A synopsis is an overview of what happens in your story. Treatment is how you would film it to make it look good on camera (how you would use music, lighting).

And finally, a sample video shows what your idea might look like when filmed. It’s important to note that these are all just pieces of paper with words on them – they don’t need to be fancy or expensive if this isn’t your job!

In order to create a TV pitch packet, you need to have an intro letter that introduces your show and its premise.

The next section of the packet is divided by whether it’s for non-fiction or fiction shows. Non-fiction requires a treatment, one or two pages with up to five sentences per paragraph describing what the show is about and why people should watch it.

Fiction needs a synopsis, which should be three paragraphs long with each paragraph containing no more than 10 sentences.

You also need production details like the number of episodes produced, locations used, release date(s), target audience, etc., as well as any awards, won so far in the development stages.

Finally, there are sections on distribution strategy and marketing plan if applicable.

There are so many people vying for the same opportune position in the industry that it’s like being at a black-tie event with everyone wearing white: you’re going to get lost in the crowd.

But here’s how you can make sure your pitch stands out from the pack.

The first step in any pitch should be understanding who your audience is and what they want, followed by developing a strategy for how to best engage with them.

Do you know the difference between a pitch and a proposal? A pitch is typically shorter, more informal, less detailed, and often done to get an idea across.

Proposals are usually much longer and include more detail. The content of your pitch will depend on who it’s being pitched to.

For example – if you’re pitching your company’s new product line to investors, they’ll want details on how much money has been spent developing the products so far along with some projections for what sort of return can be expected.

But if you’re pitching an article idea to your boss at work in order to ask for time off from work this weekend then she might not need as many details about the story or why it needs coverage. 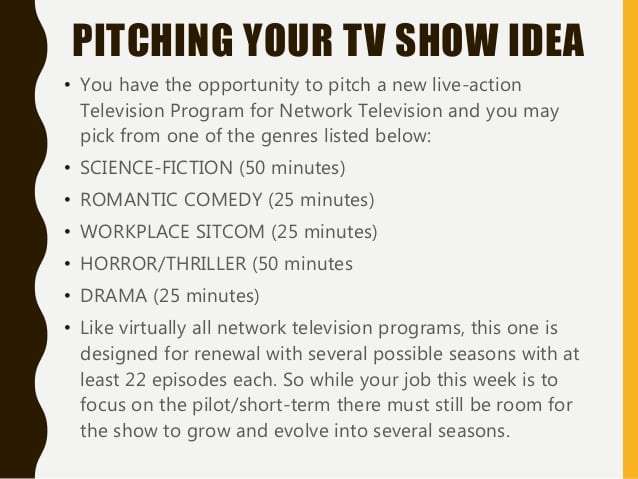 How Do I Sell An Idea For A TV Show?

Have you ever had an idea for a television show that is just waiting to be made? Have you thought about it and wondered what the process would be like to get your idea in front of producers and TV networks?

This article will give you some insight into how the process works.

The first step is to create a pitch document, which includes everything from loglines to character descriptions. You can use this as a way of marketing yourself as an expert in your field while also showcasing your creativity.

Once written, pitch documents are sent out either electronically or via snail mail (yes, it still happens!) in order to drum up interest among industry professionals who work at those networks or production companies.

We’ll learn what is involved with pitching your ideas and what’s expected of you in order to make sure that you’re doing everything possible so that someone will want to buy your idea.

The first step is figuring out who would be interested in buying the rights to your tv show. Which networks are looking for new shows? What kind of things do they typically produce?

Do they have any open spots on their lineup? You need answers before reaching out! Once you’ve found some potential buyers, it’s time to come up with a plan for selling them on the idea.

First off, it’s important to know what type of show you’re pitching.

Some shows are more difficult to sell than others because they require a lot more work on the production side.

It’s always easier when you’re pitching an animated series or reality TV show as opposed to a scripted comedy or drama.

If this is your first time trying to get someone interested in buying your idea for a tv show, make sure there is enough information about it that they can see how much potential it has!

How Hard Is It To Pitch A TV Show?

It’s not easy to get your show on TV. It takes a lot of work from the creators and producers, but it also requires a great deal of luck.

Pitching a TV show is no easy task. It takes years of hard work and dedication to even get the chance to pitch an idea. In order to be successful, you need patience, creativity, and persistence.

The process starts with researching what shows are currently airing on television or in production so that your idea isn’t too similar to anything else out there already.

You have to then write up a synopsis for your show’s pilot episode and figure out how much it will cost before pitching it around Hollywood studios and networks like ABC or NBCUniversal until someone bites!

If you’re lucky enough to find someone who wants your show, then congratulations! Now all you need is time… lots of time…to make it great!

If you’re interested in pitching a tv show, then it’s important to know what goes into that process. It can be a long and difficult process for many people, but there is help out there for anyone who needs assistance.

If you’re not sure about pitching, it may help to attend seminars or workshops at organizations like Creative Artists Agency (CAA) or Writers Guild West (WGA).

Pitching a TV show to the room is not as easy as it might seem. A lot of people think that everything can be done with one pitch, but in reality, you need to have a number of pitches for different parts of the story.

This might sound scary at first glance, but there are really only three things that need to be conveyed: What your show is about, who would watch it (demographic), and why they should tune in.

It’s not easy to work the room because people don’t always have time for small talk but it’s an important skill if you want to succeed in your career.

You’re at the party. The one where you were told to “work the room.” But what does that even mean?

You glance over and notice people mingling, talking with each other, and being social. So you do just that! You walk up to someone who looks interesting or is standing alone and say hello.

And then…well, it’s hard to say what happens next because there are many different ways for a conversation to go depending on your personality type, how much alcohol they’ve had so far tonight, or if they have a friend in tow who wants them all to themselves.

However, everyone agrees on one thing – it’s good practice to work the room!

We all know the importance of networking and meeting new people, but what about those times when you’re just not feeling it?

The best way to work a room is by following these four steps:

These are guidelines for working a room whether you feel like it or not!

How To Edit Videos With YouTube: Complete Guide, With Examples & Tutorials

What Is a LUT? Definition, Examples & How To Use Them To Their Max

Welcome To Your Reality And Acting In The Moment

How To Start A Video Production Company With No Money

Become a Creative Genius in 9 Steps