So you want to use a steadicam? If your video or film projects needs a little extra stabilization, then you’ve come to the right place. This is our list of the best steadicams and we’ll cover what we believe is the best steadicam for DSLR.

The simplest way to look at a steadicam is as a kind of floating tripod that carries a camera, enabling you to get gliding, flowing shots that add production dynamism to your project. It’s not uncommon to find the steadicam listed under an alternative spelling – Steadycam.

Developed by Garrett Brown in the 1970s, the steadicam was originally a kind of wrap-around contraption for the body.

In more modern times, the term “steadicam” has come to be used for any kind of stabilization gear that allows you to get those flowing, gliding shots that you couldn’t perform with a standard setup (like a tripod) – especially tracking shots.

What Is A Steadicam?

The Steadicam consists of very complex mount and camera stabilization systems that mount and enable you to use your camera in a different way.

By mechanically isolating the operator’s movement , the camera installed adapts to the movements harmoniously, which enables shake-free and smooth shots.

This functionality is particularly important if you want to shoot footage that is characterized by a lot of movement, such as event video setups and sports events, for example.

While, in the traditional tripod setup, you’re tied to a tripod at a specific location where it’s placed, the Steadcam lets you move freely wherever you want to take advantage of a shot.

Here are some of our favorite steadicams and why we find them so awesome. As we mentioned earlier, the modern definition of the steadicam includes glidecams and gimbals. As people refer to these interchangeably these days, we’ve included these in the list, too. 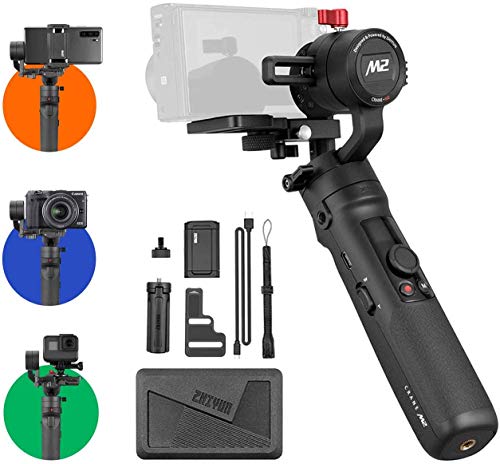 The iGlide II is the most advanced and sophisticated small stabilization system Glidecam has ever launched. It was designed for very light and compact cameras up to 1.4 kilograms – so perfect for DSLRs.

The iGlide II is the perfect companion for filmmakers who often shoot with small, lightweight cameras. It’s also the perfect size for easy storage.

The iGlide II has not only adopted all the proven features of its predecessor, iGlide but has also undergone several adjustments to provide greater flexibility.

The older iGlide is designed for cameras up to 500 grams in weight, the successor model iGlide II can easily stabilize cameras weighing up to 1.4 kilograms, three times the weight of its predecessor. 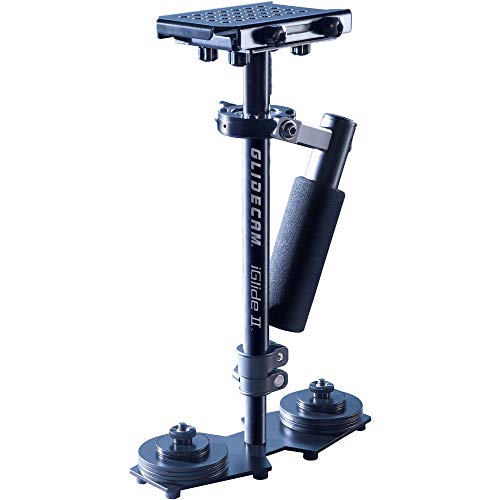 What Are Steadicams For DSLR?

A Steadicam is a camera stabilizer that helps to provide stable, shake-free shots. It’s often used by professional videographers who are filming for feature films and television shows.

The Steadicam was invented in 1975 by a man named Garrett Brown who wanted to find an alternative way of shooting movies without the cameraman having to be on their feet all day.

Originally developed for professional cinematographers, it has been adapted for use by anyone with a DSLR Camera and the creativity to find their own unique way of using this equipment. 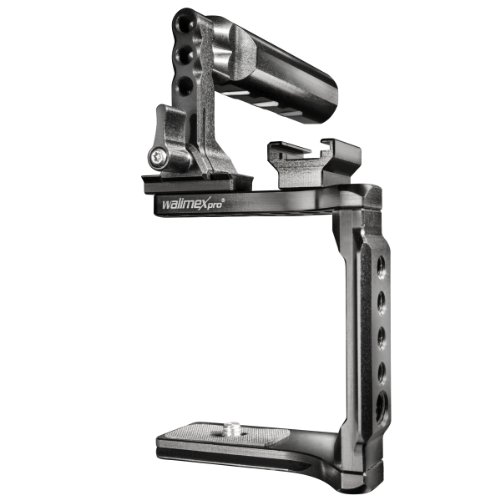 All this is possible thanks to the latest suspended tripod: a complex mounting system for portable film and television cameras.

By decoupling the uneasiness of the free-moving cameraman from the camera, the stabilizer allows shake-free images. This renders you free to get some awesome, smooth shots no matter what kind of project you’re working on.

The TARION comes in at a very competitive price point. It’s a great piece of stabilization kit that has proved popular also with a lot of the people we’ve worked with over the years. 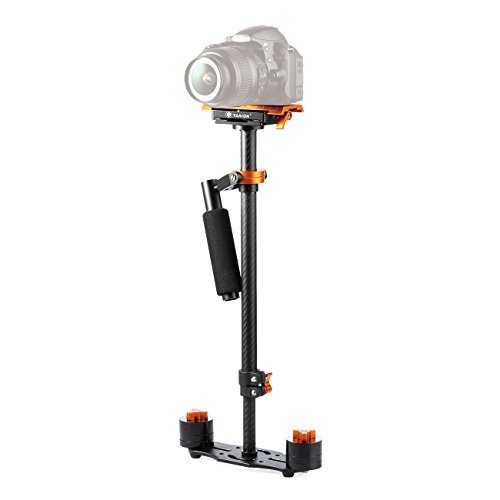 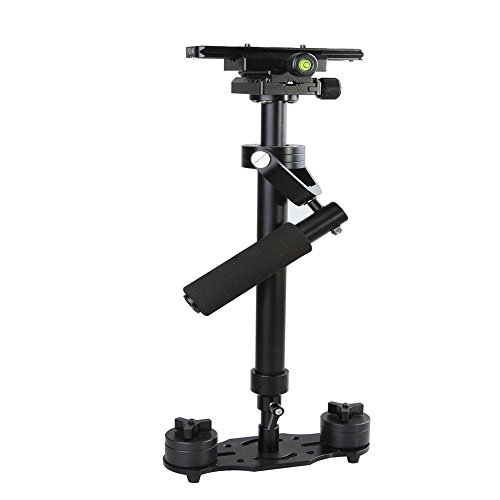 Advantages Of Using Steadicams For DSLR

• Easier and more comfortable to shoot for longer periods of time.

• Helps stabilizing the camera when used in manual mode.

• Allows for a smoother and more fluent video production process.

• Allowing you to shoot at lower shutter speeds while maintaining smoothness.

How Does A Steadicam Work?

The Steadicam is thus a floating tripod for optimal shots without jittering and jerking. But how does this technique work, which helps to counteract unwanted movement and shake?

Paramount for the positive effect is the construction of the Steadicam. The emphasis is placed on the fact that the center of gravity of the construction lies in the handle, which is normally located between the camera and the counter mass.

The camera is usually attached to the end of a vertical rod of the tripod. The secret that guards against movement is achieved by the fact that both the weight of the camera and the weight of the Steadicam, and additionally mounted balance weight, can be adjusted so that all components have the same inertia.

In addition, there is usually above the handle of the Steadicam a so-called gimbal suspension, which mechanically decouples the camera from the operator. This construction means that the movements of the cameraman do not affect the camera, including any kind of human-aided movement.

So the cameraman can move his hand without worrying about the shooting results. In addition, the steadicam’s construction does not produce any torque on the wrist that could be quite painful.

The aforementioned original design of the steadicam (designed to be worn on the body), promised even more effective properties because the cameraman does not have to carry them by hand, but the whole weight is held by the body. So the camera movements by hand are even less important for the position of the camera.

Advantages & Purposes of a Steadicam

The biggest advantage of the Steadicam, of course, is the mode of action for which it was constructed. By isolating the inertia and mass of the camera enables it to become independent of the movements of the cameraman, leading to smooth, shake-free footage. Blurring and jerking belong in the past!

As a result, such a Steadycam setup is ideal is you find yourself doing a lot of tracking or following shots in your filmmaking. This is especially useful in event and sports coverage.

Filming scenarios in which the subject does not remain in place, such as when filming a concert, for example.

Also, imagine filming at a soccer game. There, you cannot hold the camera in a position because the ball is constantly changing sides, the teams are moving over 100 meters from one to the other penalty area, so easy tracking of the action is required. This applies whether you’re shooting a narrative project or a documentary piece.

With the Steadicam, you can easily zoom in and follow the ball throughout a passage of play in the game without those jerky, terrible the shots.

The Steadicam, therefore, is suitable for everyone. Both professionals and beginners can use the technology for themselves and be inspired by the smooth, professional results. Getting smooth tracking shots adds production value to your project.

In this day and age of fancy camerawork (even on the most basic of YouTube videos), this kind of production quality is almost assumed.

What types of Steadicams are there?

The Steadicams are available in different versions. You can get compact tripods as well as hinged variants, which then usually better transport. In addition, there are variants that can be held in the hand or worn on the shoulder.

As well as the standard steadycams for DSLRs and camcorders, there are lots in existence for smartphones and GoPros, too.

Above all, the Steadicams differ with respect to their application, use-case or the persons by whom they are used.

Professional, Hollywood-type Steadicam systems are usually much heavier and often worn on the body with a shoulder strap or vest. They are primarily intended for very heavy film cameras.

How heavy is the camera?

Of great importance is the payload of a Steadicam. This speaks to how heavy the camera should be, which should be used with a Steadicam. There are, for example, variants that can carry a camera weight of 0.9 to 2.7 kilograms.

Other models may even carry a weight of five kilograms, in which case a vest or shoulder strap should be used for non-fatiguing and overuse. Not unimportant for a comfortable wearing is of course also the weight of the Steadicam. In this case, for an optimal comparison, care should always be taken that you’re not overburdening yourself or the steadicam.

Best Steadicam For DSLR – In Conclusion

As with any camera gear purchase, choosing the right steadicam for you is best achieved by asking a number of key questions.

Price point is always a consideration no matter what you’re buying. The steadicams we’ve featured here all come in at very competitive price points.

Weight / Durability will always be a factor. Some of these models are heavier than others. Some will only take a small amount of weight. So consider the camera you’re going to be using with your steadicam. And always look into the specs and details with a high degree of focus.

Travel is also important. If you’re like most filmmakers, you travel for work a lot. Therefore, it’s important to consider the weight and travel-ability of any camera gear that you guy. Purchasing when of the smaller steadicams is probably going to be more beneficial for you in the long run.

We hope you’ve found this detailed guide to the best steadicam for DSLR useful. We’re covered a number of the best steadicams here and we’re explained that nowadays most people consider the terms steadicam, glidecam and gimbal to be interchangeable.

Have we missed out your favorite steadicam? Let us know in the comments below.