Best Microphone for Filming in 2021: 8 of the Top Microphones For Filming

No matter how great your shots are or how nice the visuals of your finished film are, if they are accompanied by bad audio, your video will be ruined. That’s why we’ve put together this list of the best microphone for filming.

Unintentionally captured sound or sound captured that is just too soft to be comfortably heard are a sign of an amateur or inexperienced video production company. It will distract viewers from the true intent of the film.

Using a microphone will help guarantee that the sounds captured during filming are the sounds you want to be captured.

It’ll also help eliminate the problems of fuzzy voices and loud background noise, as the microphone will be more directional.

Using a good microphone is especially important when filming footage that is interview-heavy.

You want to be able to capture not just the images of the subject you are interviewing, but also their voice.

You want those viewing the video to hear their words loud and clear. The best way to do so is to use a microphone for filming.

In this post, we’re going to share with you some of the best shotgun and lavalier microphones for filming. Check them out and find one that suits both your work needs and your budget.

Let’s jump right into our list of the top microphones for filming.

The Rode VideoMic Pro is a condenser shotgun microphone that picks up and records broadcast quality audio. You can use this mic with DSLR cameras, camcorders, and even audio recorders.

It is a compact mic, only about 6 inches in length and weighing only about 85 grams.

This makes it easy to transport and also to place in such a way that it’s near enough to capture all the sound and dialogue that you want while still staying off the screen and hidden.

The Rode VideoMic Pro has a shock mounting system and a lightweight premium cable that significantly reduces the amount of noise transference that is picked up in the audio.

The mic uses a super-cardioid pickup pattern which allows it to capture audio in the front while minimizing noise pickup on the side and rear. This makes it perfect for all kinds of projects!

This mic is powered by a 9-volt battery and can give you up to 70 hours of recording time.

The Rode VideoMic Pro is one of the go-to microphones for use on a DSLR. This microphone is a favorite of lots of folks getting a DSLR for the first time.

As I’m sure you’re aware, the mic built into the DSLR is beyond poor (unless tinny sounds are what you’re going for!), so this microphone is a perfect next step up that’ll capture quality audio.

This mic is especially good for catching ‘hubbub’ sound in rooms.

I really like using it on event videography work, where I leverage it to capture diegetic background sound, in addition to a primary microphone elsewhere. 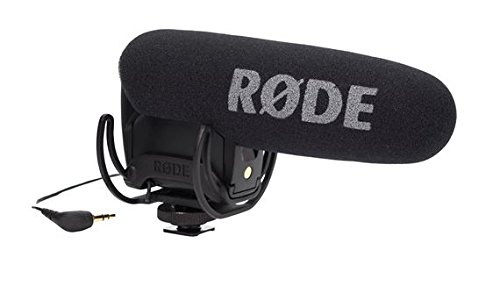 This is a budget-friendly omnidirectional lavalier microphone that allows you to clearly capture voices and dialogue.

It is very small and lightweight, at only 6 grams, so it’s quite easy to place on your subject in a way that will not interfere with their movements and discretely record everything that they say with a minimal amount of background noise.

It’s certainly a handy little mic and a great recommendation for those looking for a budget-friendly option when it comes to the best microphone for filming. 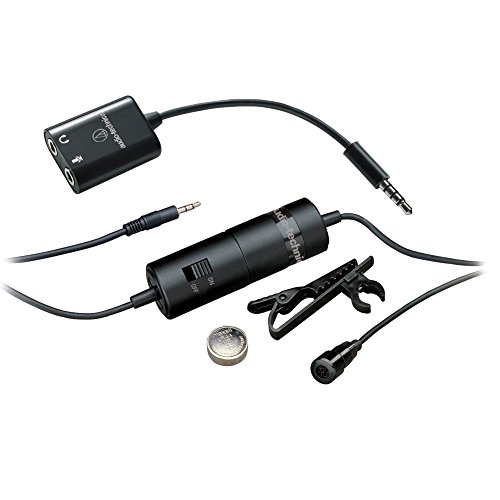 It will fit almost all cameras, as long as the camera has an external microphone input and a standard hot shoe mount.

The Sennheiser MKE 400 has a switchable wind noise filter and switchable sensitivity for handling audio recorded over long and short distances.

This mic uses a AAA battery for power and offers 300 hours of operating time. 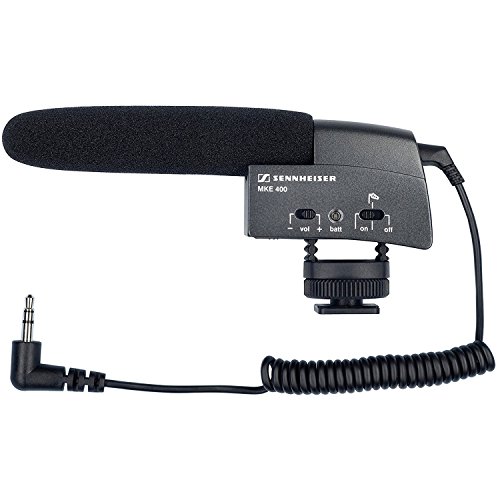 This is a lavalier mic that comes in a variety of colors in order to be easily hidden from both cameras and a live audience. It’s only about 0.2 inches in diameter, so it’s easy to hide on your subject’s body where it can invisibly capture quality audio.

The Countryman B3 is an omnidirectional microphone that captures clear audio with a minimal amount of background noise.

It also has a windscreen, which comes in handy when you’re shooting outdoors.

The Countryman B3 is designed to be moisture resistant, so you can hide it on your subject without fear of it getting wet outside, and even tape it onto their bare skin.

What Are Microphones For Filming?

Microphones have been a mainstay of the film, TV and video industries for many years.

They were originally used to amplify sound so that people could hear it more clearly over long distances, and as a result of this, they became an important part of filmmaking once recording processes became more streamlined.

Microphones for filming come in many different shapes and sizes depending on what is being filmed, but their main function is to capture sound without distortion or interference from other noises.

Microphones are typically used in conjunction with other audio recording devices, such as a digital recorder or mixing board.

The Tascam TM-2X is a cardioid microphone that can be mounted on and plugged directly into your camera. It captures high-quality audio for high-definition video and stores it straight to your camera.

It comes with a noise isolation arm that helps reduce the background noise produced by your camera, such as the operation of the lens.

There is also a floating support structure underneath the mic which helps ensure that unwanted noises and sounds are prevented from being captured on the audio track.

The Tascam TM-2X draws power directly from your video camera so you don’t have to worry about any additional batteries when using this mic. 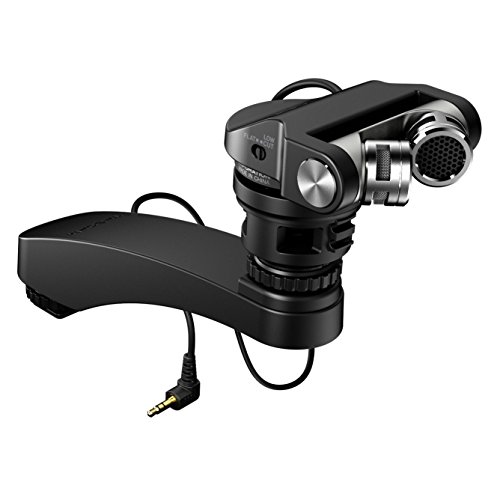 The Azden SMX-10 is a stereo condenser microphone that allows you to directly record high-quality audio. The mic is about 7 inches long and weighs only about 1.83 ounces without its battery.

It has a foam windscreen and shock-mount microphone holder to help it pick up audio clearly with a minimum amount of background noise.

The Azden SMX-10 is powered by a single AAA battery. It offers you about 400 hours of continuous operating time.

This is another tried and tested mic that makes a great impact at a very reasonable price point. 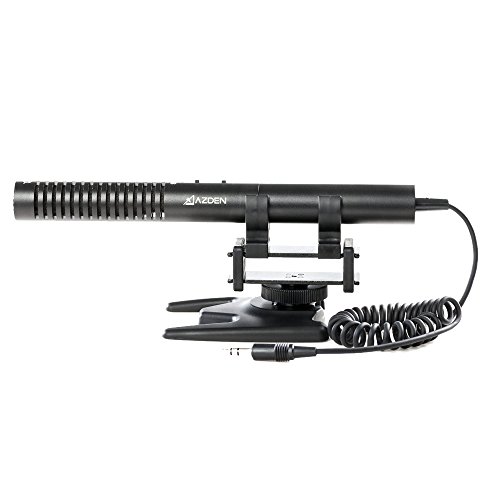 Advantages of Using Microphones For Filming

• Great for capturing the audio of an interview.

• Helps minimize background noise like construction or traffic in the distance.

• Keeps your videos sounding professional even when you’re not a pro video maker.

This microphone from Audio-Technica is a gradient shotgun condenser mic. It was designed specifically for use in video production and also in broadcast audio acquisition.

The Audio-Technica AT875R is small, at just under 7 inches in length, so it’s easy to maneuver and keep out of your shots.

You can also easily mount it on your camcorder without adding too much extra weight, which if it gets too heavy could affect your camera’s stability and your ability to take smooth shots.

This mic has a narrow acceptance angle which means it’s good for long-distance sound pickup and is good at rejecting sounds that come from the side and rear of the mic.

So it picks up your subject’s voice and not the noise of what’s happening around them. Making it very suitable for interviews and setups like that. 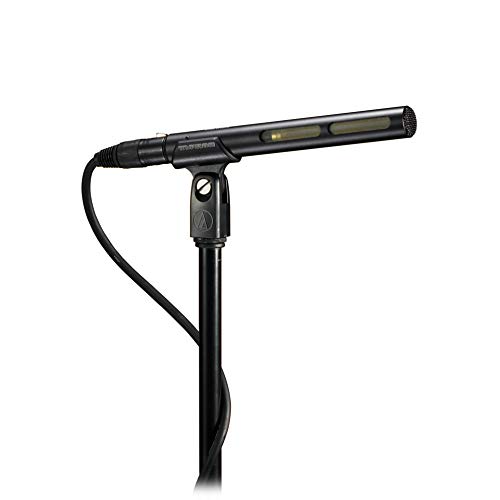 This is another shotgun mic produced by Sennheiser. It’s basically a single tube that you can mount onto a camera or use with a mic stand or boom pole.

The Sennheiser MKE 600 is a super cardioid microphone that works well with both video DSLRs and camcorders.

It has a shock mount and a foam windshield to help cut out background noise from the recording.

Like other super cardioid mics, it picks up sound coming in the direction that your camera is pointing and effectively dampens any noise coming from the sides or the rear.

There are two ways to power the MKE, either through phantom power if your video camera is equipped for that, or by battery power.

This mic is selected by many experts as a top choice for all kinds of filming situations, making it one of the gems on this list of the best microphones for filming. 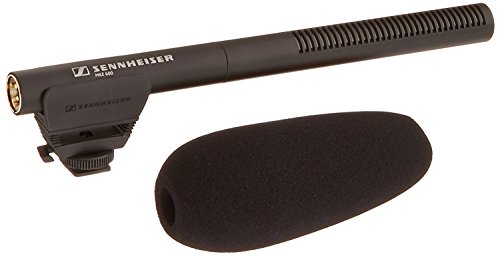 Best Microphone For Filming – In Conclusion

For filming, there are usually two types of microphones that are commonly used – the lavalier and the shotgun microphone.

A lavalier microphone is a small microphone that can be attached to the collar of a speaker’s shirt.

They are a great option if you are trying to capture the voice of just one subject, especially if that subject is going to be moving around a lot.

A shotgun microphone is usually the best mic to use during scene or crowd shots. It allows you to clearly capture the sounds and voices of many people in the same area.

While a shotgun mic might pick up a bit more ambient noise than a lavalier mic it also makes your subject’s voices come through close and clear. Shotgun mics are also more “hidden” than lavalier mics as they can be held over or just outside the frame.

For that reason, shotgun mics (with a boom pole) are normally the ones you’ll hear about being used in narrative filmmaking. Whereas, documentary (and interview-based) video work normally makes use of lav mics.

As it is with buying anything film and video related, purchasing equipment is a balance between your project goals and the budget you have. We’ve included a range of microphones for filming using a variety of price points.

The gear that you invest in now will last you a long time if it’s looked after. So buy quality equipment, look after it and it’ll pay back dividends on the money you spend now.

Succeed with an Email Newsletter for your Video Production Business

Best Wrestling Books in 2021: 77 of the Top Books On Wrestling

How To Use a GoPro Like An Expert: 7 Tips To Make Better Use of The GoPro

Best Camera Slider in 2021: 6 Sliders That Will Improve Your Filming